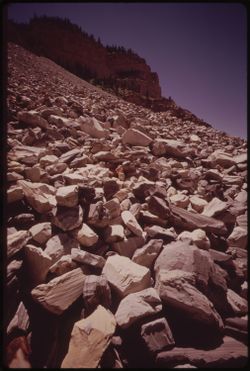 
Washington D.C, U.S.A - After an extensive environmental impact study, the U.S. Bureau of Land Management has determined that excavation of shale oil in the Uinta Basin of Utah would seriously harm a local species, and will order all excavation to immediately cease. The species is not a spotted owl, or even a mosquito, as one would expect. According to the study, the excavation of shale oil in Utah would harm the local population of Mormons.

During the years of the Bush Administration, the president, known for making choices that were not completely thought out, authorized the excavation of the shale oil on federal lands in Utah, in a short-sighted move that would have brought certain destruction to a local population. President Bush stupidly assumed that tapping in to the estimated 1 to 3 trillion barrels of oil in the region would reduce U.S. dependence on foreign oil, create several new local jobs, and increase the supply of world oil, thereby lowering the cost of this commodity world-wide.

Fortunately, saner minds at the Earth Liberation Front filed legal action against this outlandish idea, logically claiming that the $10 million spent doing environmental impact studies was woefully inadequate, and asked the BLM, now under the divine leadership of President Obama and his appointee, Bob Abbey, to reevaluate the local impact of the drilling.

The BLM, tripping all over themselves to comply, spent an additional $132.6 million looking for any possible impact that the new "environmentally friendly" mining methods might have on species in the area. Hugh R. Wright, Director of the BLM lands in Rhode Island, was flown in to personally oversee the study. He was chosen because there are no BLM lands in Rhode Island, and he had nothing better to do.

"We couldn't trust the BLM people in Utah," said Wright, "because they did the first study, and obviously weren't thorough enough. They must have had some local bias or something. Bob Abbey chose me, because he knew I would leave no rock unturned until I found some kind of evidence, or I mean, determined whether there was evidence that a local species might be harmed."

"We looked high and low. We examined every species of deer, elk, varmint, insect, fungus, and slime mold, but found nothing. We then turned to the plants in the area (see photo) where we looked at the local grasses, shrubs, trees, dandelions, and noxious thistles and weeds, but again we found nothing. Unfortunately, or I mean fortunately, the green mining technology developed by several local Utah firms, simply doesn't have any significant impact on the environment."

"Then we looked at the one creature we almost never look at; the local population of humans. What we found astonished us. I simply cannot believe that the Bush Administration would authorize this action when it would cause such devastation to the local population. It borders on criminal negligence. I can't even talk about it. You'll have to read the report."

The report is indeed dire. The report shows that the action would bring billions of dollars into the region, which might somehow find it's way into the hands of some local Mormons. Because money is the root of all evil, according to the report, to do something like that would irreparably harm the purity of many local Mormons who work so hard to avoid evil. Therefore, the report recommends the stoppage of mining.

In a footnote, the report also states that, in the hands of Mormons, some of the money might be donated to the campaign of Mitt Romney or other Republican politicians, but that is clearly beside the point.