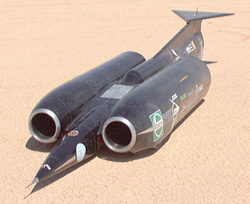 Thrust SSC - The only legal car drive able on the Autobahn.

AUTOBAHN, Germany -- On the Autobahn, the fastest highway in the world, has recently upped its minimum speed to 1000mph in order to stay competitive with the other highway systems throughout the world. It is seen as a surprise to all the drivers on the Autobahn, who were all pulled over by German cops and fined several 100 Euros, and are expected to switch over to multi-million dollar supersonic fighter planes.

Driver Ricky Bobby had the following to say, "What the hell??? I was cruising at 300mph in my brand new Bugati, and wham! Some drunk cop pulls me over and fined me, like a hundred Euros! That's like, $200, man!"

"This is really good news for the Aerospace industry", said CEO of Lockheed Martin, Bob Randall. "This announcement of the Autobahn will allow us to pioneer new technologies in Civilian Transport, and to make even more money and deposit it in our $2 trillion savings account."