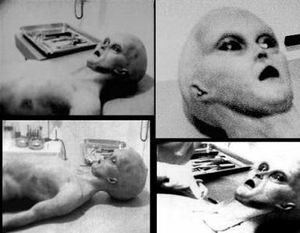 Alien autopsies twice daily at 11am and 2pm, extra sessions on public and school holidays.

Groom Lake, Nevada -- After decades of denials, the veil of secrecy that has surrounded the top-secret facility known as Area 51 has been lifted. Following the construction of a visitors' center and coffee lounge, the mysterious Area is now open to tourists.

"In recent years we've seen a change in the focus of domestic intelligence," said Agent Johnson of the US Bureau of Nefarious Matters. "With all the resources going to wire-tapping, we just don't have the funds to organise a huge conspiracy of this type any more. So we've had to make 51 self funding, hence the gift shop."

"Seriously, do you know how much it costs to put tracking chips in every copy of Islam for Dummies? Well, I can't tell you, because it's classified. But it's pret-ty darn expensive."

Visitors were plentiful on the opening day, as large amounts of Internet 'buzz' took the place of a more expensive advertising campaign. But not everyone understood the purpose of the sinister zone, famed in UFO folklore.

"I was driving to Vegas when we passed this thing," said middle-American father of three Chuck Polsak. "I thought it was some sort of Air Force museum, so I thought we'd drop in to have a look at this country's proud aviation history. Instead, I see all these pictures of Ike shaking hands with space-aliens and whatnot. I'm not quite sure what to make of it, but the kids seem to like it."

The conspiracy theory community was initially enthusiastic to the idea, but in some quarters this enthusiasm has given way to disappointment.

"For a while there, I was all like 'Wow! I'm in area 51!'" said Omaha based conspiracy theorist Larry Talbot, webmaster of reptilian-watch.com. "But it's just so... touristy. Sure, there's a frozen alien in a jar, but that animatronic Hall of Secret Illuminati Masters was just embarrassing."

Other conspiracy nerds theorists were just as let down.

"Years of my life in ruins!" sniffed Messengers from Beyond author Klaus von Hinterland, gesturing to a group of bored schoolchildren huddled around the interactive 'How Crop Circles are Made' exhibit. "All that painstaking work! Until I saw this place, I never realised just how dull it all was. Look there! Behind the Chui the Chupacabra mascot are the actual signed and notarised minutes of the Supreme Masonic Lodge's meeting where they voted to assassinate JFK, and I can't even be bothered crossing the room to read them."

"The Roswell saucer was a big letdown," said Rochester, NY resident Graeme Shellman. "It just looked like any pile of broken machinery. Hell, I was almost starting wonder whether it is a weather balloon."

"Hey, you don't think this is all, like part of the conspiracy, do you?" asked Graeme's wife, Laura Shellman, sipping forlornly at her 'Sasquatch Strawberry' milkshake. "Like, it's trying to suppress the truth by showing it to us?"