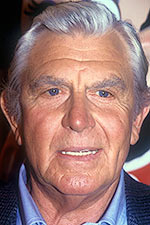 Mayberry, NC -- Andy Griffith was very surprised on November 3rd to discover he had received a court summons--from himself.

"I can't believe I would do such a thing," Griffith lamented. "What a bastard I am."

The 700 Club host Pat Robertson suggested that Griffith was possessed by a demon that made him file charges against himself why he wasn't looking, offering "I know a lot about this nifty doctrine called assassination, and if Andy Griffith's demon doesn't know we're plotting to kill him, I think that we really ought to go ahead and do it."

Both lawyers and psychiatrists were baffled by the idea of a man suing himself. "I don't want to go to another damn shrink," Griffith snarled. "I have to lay down awkwardly while some touchy-feely guy asks me how I feel. You know how I feel? I'm eighty years old, and I haven't had a good show since Matlock got canceled in '95!"

"This could be why he's suing himself," said world-famous psychiatrist Sid Vicious. "He's angry, dissatisfied with himself. That is, his subconscious has reckoned that the only way to compensate himself for his own misery is to sue himself."

The court date is scheduled for early January. Some court officials have suggested that Andy Griffith can use the defendant and plaintiff stands interchangeably. Griffith agreed to this, on the condition that they be placed close enough to each other that he can switch back and forth without "gettin' all sweaty".

“To sue another for petty reasons is malicious, but suing yourself is sheer madness!”
~ Oscar Wilde on people suing themselves