UnNews:Adam Sandler expresses concerns that his next film ‘might not be shitty enough’ 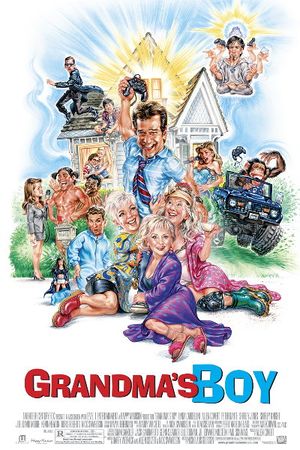 The poster for Sandler's Grandma's Boy, which Sandler has cited as 'a triumph of crappy humour, lauding of stereotypes, and the shameless whoring of aged and desperate ex-sitcom actresses.'

HOLLYWOOD -- Adam Sandler, the movie director, producer and star cited by one critic as being “the man who will drag society’s standards for basic comedic entertainment down to a level so low that one day an earwig falling off a wall will be considered side-splitting” has recently expressed concerns that his next upcoming film, The Lurve Poet, might not be of the low standard and poor entertainment quality that has come to be expected of him.

“It’s really starting to worry me,” Sandler said to UnNews yesterday, “especially considering everything’s been filmed, all that fancy putting-scenes-together shit has been done, the film’s been sent off, and the advertising’s started. I guess I should have noticed it earlier, but, y’know, usually during filming I sort of get high on the thought of just how glorious I am in all my crowd-pleasing ineffectual shittiness and don’t pay much attention to any of the actual filming.”

Sandler stated that he was concerned that the film’s humour content “doesn’t contain the essence of the screaming unfunniness and brain-cell-munching stupidity” present in his previous films. “Oh, sure, there’s plenty of ‘me’ in it, if you see what I mean,” said Sandler, “you know, unrealistic characterisation entirely derived from worn-out stereotypes, random and forced gross-out humour-hell, there’s quite a few scenes I really like…like this one where pages from a poetry book, toilet humour, and reproductive fluids are strategically combined…and of course, the obligatory ‘nice girl makes out with main guy even though he’s a horny jerk who’s been pretty much drooling down the back of her neck throughout the entire film’ and ‘ugly guy gets laid with fifty hot chicks even though the entire movie’s been preaching that any imperfection in looks deserves mob violence until now’ scenes. But all the same, I can't help but feel that there's too many jokes that require...well, thought. I think a major part of that comes from the classical theme-we haven't ripped it off in the way that really screams 'this culture sucks and we want to have our forced way with it even though we barely know what it was!'"

The Lurve Poet, scheduled for release in early 2009, features Sandler himself (“I can’t feel it’s reached the proper level of stupidity unless it’s got my smug little grin stuck all over the poster,” said Sandler) in the starring role of Chad, a trainee fashion magazine photographer who becomes infatuated with one of his new regular models, Shirley, whose interests are impeccably balanced between keeping her appearance flawless, and classical poetry. In an effort to win her over, Chad sets out on an endeavour to gain an educated knowledge of Byron, Shakespeare and Coleridge, with, as Sandler and all critics describe them, “hilarious consequences, assuming you find rude origami and constant cracks about the length of Shakespeare’s hair funny.”

The Lurve Poet also features Heather Graham as Shirley and Allen Covert, whom has worked alongside Sandler in numerous film projects (to “double the dumbness”, according to Sandler), as Chad’s misogynistic, tough-guy roommate Trent.

“Another cause I can think of is that, when writing the script, I tried my hand at that whole ‘irrelevant cultural references’ thing that was so rampant in Epic Movie”, said Sandler, “because I thought it might pick up some of that film’s stupidity-I mean, imagine where you could get when you combine that stupidity with mine! It’d probably cause an outbreak of weird bacteria that ate away at all entertainment made before the ‘70s! But, anyway, as I learned the hard way, irrelevant cultural references have to be handled properly if they’re to be made to not require any thought at all. I mean, there’s this one scene where they’re talking about this weird government secret code, and a guy says ‘Numbers in blocks? We talking about the Japanese government here?’ Now, of course, anyone whose rationality capacity could rival that of an third-world six-year-old with brain trauma could tell that that’s a reference to Sudoku, but ‘anyone whose rationality capacity could rival that of a third-world six-year-old with brain trauma’ doesn’t really sound like my fan base-and the last thing I want is my loyal and highly unstable fans getting the idea that my characters are smarter than them-it’s my duty to pander consistently to their delusion that their standard of intelligence is an acceptable one, as opposed to one that will cause society and the economy to collapse under the weight of sheer incompetence.”

Allen Covert, however, is adamant that Sandler’s fears are unnecessary, due largely to the presence of his character in the film.

“Seriously, Adam’s just having a bad day.” said Covert. “My character totally balances out the humour. He's got it all: fake abs, steroid addiction without any of the side effects, sexist jokes from the 50s revised to be ten times as dirty and five times less funny...and at the end, he does something to a poetry book that's making us consider renaming the movie American Poetry. And above all, of course, he's thick as a builder's set of ebony planks and unrealistically proud of it. His character practically rapes any intellectualist sentiments."

The Lurve Poet will be released worldwide in January 2009, although it has been assured that the most stupid parts are already available on YouTube, at Sandler's behest.

This article features first-hand journalism by an UnNews correspondent.
Retrieved from "http://en.uncyclopedia.co/w/index.php?title=UnNews:Adam_Sandler_expresses_concerns_that_his_next_film_‘might_not_be_shitty_enough’&oldid=5933782"
Categories: