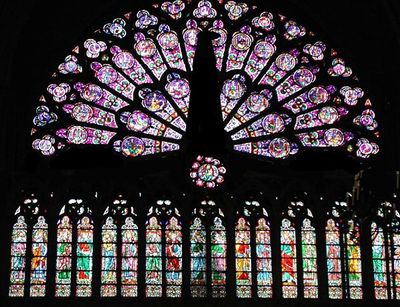 Glass window at a private Christian school, stained with only God knows what.

On the outside, St. Sebastian Barnabus Lysander School for the Rich and White looks like any other top grade, highly funded private school in the country, but a recent Ofsted report has shown that it is one of six schools in the West London area that are actively radicalizing students in the ways of Christianity. Inside of the school is a different story, says Ofsted inspector Khalidulah Al-Khalif. He said the pupils' "physical, psycological, figurative and educational welfare is at serious risk" following a series of emergency inspections and that also all the schools focused too heavily on Christian teachings.

Education Secretary Ahmed Hossian says the schools will be closed down if substantial changes are not made quickly. She said: "We asked Ofsted to carry out these independent school inspections and the findings are very concerning. While there is no suggestion of a plot to start a crusade, massacre Jews and Pagans, or to rekindle witch-hunting, it is clear that these schools are failing children and this is unacceptable. All schools must prepare children for life in modern Britain, a Britain where hanging Atheists and selling their ears on E-Bay just isn't right"

At one school, inspectors found pupils did not know the difference between The Seven Laws of Noah and British law. And they said the curriculum at King Gregory's in Chelsea "focused solely" on Christian themes. In a letter to Ahmed Hossain, Al-Khalif says:"I am not convinced that the leaders of these schools have the sufficient touch that's necessary for children who are at an age where they can be groomed into becoming better people."

Some students told inspectors: "Women stay at home and hire people to clean and look after children. They get their hair done and wait for men to satisfy them with penis and money."

The debate over "Multiculturalism" came to the fore in the wake of the "Trojan horse" affairs, and the realization that hundreds of British Christian men - and fewer women - had become radicalised enough to join extremists in Texas and Rwanda, where beating gays, paedophilia and genetic cleansing are fairly standard for the average Christian.