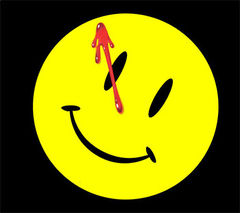 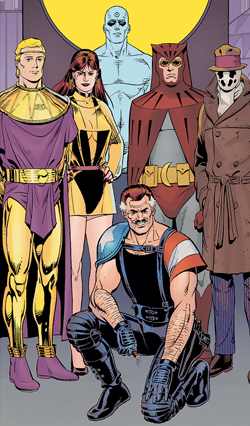 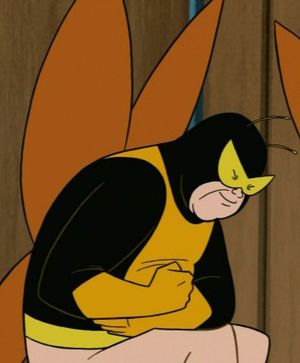 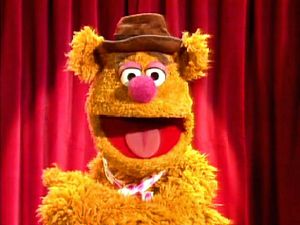 Movie version of The Comedian, dying in front of an audience 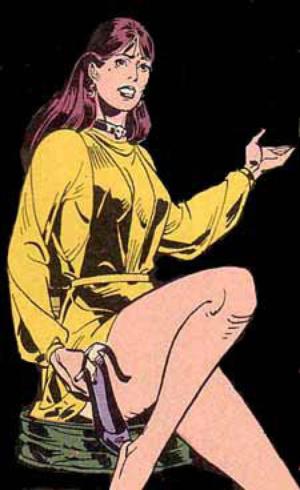 Silk Spectre, being not (quite) as vapid as she was portrayed in the movie 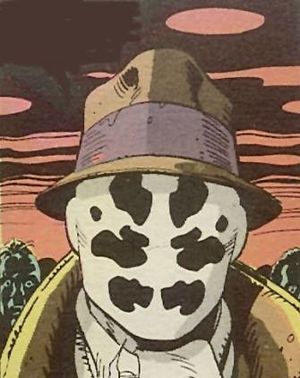 Host (Enormo the Giant Psychic Squid) - Welcome to this very special review of the film Watchmen, Watchmen, where we have you, the Watchmen, review Watchmen.

Silk Spectre - Thank you. It's an honor to be here.

Host - ...what did you think of the film? Did you find the actors who played your roles appropriate?

The Comedian - The movie was bad, but the acting was worse. The guy who played me was nothing like me. I mean, he makes me come off as some kind of sociopathic nihilist.

The Comedian - Yes, that's true. I just hate seeing it like that up on the big screen. It makes it tough to get laid. The only chicks I can get now are the ones who are attracted to bad boys and who view them as fixer-uppers. They're always trying to get at the seed of humanity that I keep hidden under the calloused skin of my gruff, violence-prone exterior, but they don't realize that deep down inside, my inner child is an asshole.

Nite Owl - It makes me look like kind of a dweeb. All my friends said so, the last time we played D&D. I'm a dwarf. Redbeard Stonesplitter. Kobolds tremble when they catch sight of my weapon, the Warhammer of Dimplechin the Mighty![4]

Silk Spectre - The girl that played me was okay. Kind of wooden, but it was nice seeing such a thin "me".

Ozymandias - I'm suing. I can't elucidate further until the trial, but I found the film's portrayal of me libellous, and I should know, I'm...

The Comedian - More like The World's Biggest Dink, Ozzy.

Nite Owl - Honey, did you see the movie? He died. He died in the real world, too.

Silk Spectre - Oh. I don't remember that part. All I remember is that you had red skin and a big fist, Rorschach was a fish-guy and I set stuff on fire when I got mad.

Host - No problem. Now, to all the Watchmen who actually saw the movie, what did you think of The Comedian's death scene?

Nite Owl - I thought it, like the alley fight and prison breakout scenes, was overdone. Just seeing The Comedian's head going through that countertop made me think "Well, he's dead now", but he wasn't! In the reality most of us are basically ordinary people, right? Dr. Manhattan is the only genuine super-powered superhero, but in the movie we're all super-strong, even Silk Spectre, and in the movie she weighs maybe a hundred and ten pounds! Still, seeing The Comedian die onscreen reminded all of us what it was like when we first heard that he'd been killed.

The Comedian - ...Uh. What? I couldn't have died. That would mean that I...*Foop!* <The Comedian promptly vanishes in a puff of logic>[6]

Ozymandias - Oh, good one! Do you have any idea how long it took me to genetically engineer a giant lynx with goofy ears? Days! You all suck!

Doctor Manhattan - Excuse me for being emotionally and intellectually distant from humanity due to my own changed nature and all, but it is clearly you that sucks.

Ozymandias - No, you! Stupid! Poopy!

Doctor Manhattan - I assure you, Laurie, that I am Doctor Manhattan, mostly. The rest of me is off making life somewhere. I sent me back for this interview. Do you understand?

Silk Spectre - Not even close.

Doctor Manhattan - I can be I, and I can be we. I can also be I and we simultaneously, in multiple places or occupying the same space. In addition, each part of me, or we, also holds the entirety of me, whether I is singular or multiple, and as I am at all times complete in all times where I am, all of me is I or we in every time where I am, whether or not I am I or we in those times. Much as each individual piece of a shattered hologram holds the entire hologram and each part when further divided maintains that pattern, both each I in we and each fraction of every I all contain my totality. In short; with the exception of me before I was Dr Manhattan, where I was simply me, I is we, and we are I, wherever or whenever I am.

Silk Spectre - Oh. Since when were you Jewish?

Host - What did you think of Watchmen, the movie, um...Doctor Manhattan's glowing blue penis?

Doctor Manhattan's glowing blue penis - Given my almost Buddhist detachment, I found it unsatisfying. All my lines were cut. I find myself missing The Comedian. He would've enjoyed that joke. Then, in clipped, film noirish speech, Rorschach would have called us perverts. I miss him as well, but not enough to regret de-molecularizing him. His remarkably poor grooming and tiresome moral absolutism were quite off-putting.

Host - And on that note, I think that it's best that we bring this review to a close. I think that, like all true fanboys of Watchmen, we can all agree that it "sucked hard", as the fanboys put it. I would like to thank Zack Snyder for throwing me a bone by allowing me to host this review after cutting me completely from the script, replacing me with the far less squidtastic "Blame it on Dr. Manhattan" ending. To show my appreciation, I'm going to wait until Veidt Industries™ rebuilds the cities that Ozymandias destroyed, then I'm going to teleport in and destroy New York City.[10] What can I say, I'm a giant psychic squid? It's in my unnatural nature.