Sand grains hourglass of the soul:

The muttering conceits, of insidious intent.

Do they dwarf my mind? Or am I blind to see?

Present in your glance.

I saw you smile today, was that smile for me?

Or was at the Dog, who shat on the cold-white sand?

The sea, mans oldest foe. A black silhouette flutters into view across the sandy wastes: Chester Wells farming for crab meat and old haddock heads. The rotting fish delights him, the slither of its putrid flesh between his fingers the only release from the heckling birds. The gulls hate him. The landscape is reviled; the roar of the waves wards him off from the sea. No friends on this earth for Chester wells. Only pigs and raw meat, chopped up with onions. Cod entrails pudding for desert, garnished with old-haddock heads. Ducking amongst the boulders and stooping into rock pools he looks for oysters to call his ‘friends’, and old whiskey bottles half filled with ethanol sand:

“My god the frost, nothing but a raincoat and old felt sandals to keep me sung, damn these birds they see me alone and encourage gales to kill me. They want to see me bloated in the sun, but I won’t let them, no they’ll not get me. I’ll throw broken glass at their eyes to frighten them off. They know I mean business, they’ve seen the razor blade, I’ll cut their throats and drink the liquid, don’t you worry, they’ll not pelt me with turds, I’ve an umbrella. People avoid me, I can’t see why, I offered them some fish guts, an offer of friendship, they spat it in my face, their arrogance astounds me, they reject my flesh. The philistines, I’ve seen them laugh and know their cynical mind-games, they mock my simple life. I found an old anchor chain and ate the rust flakes, they taste like gritty mud. I batter crabs with pieces of metal and eat the flesh inside, why do they find this so repulsive? An impressive horde today, four broken bottles and a plastic bag full of rotting chips, soggy from the water. I’ll boil them with cabbages, a fine dessert! 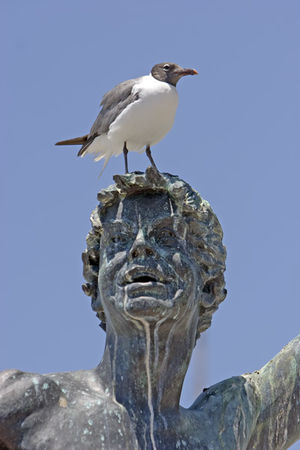 "The gulls are not my friends. "

“He came in yesterday, and ordered black pudding, in a smug bastard tone. Why does he give me paper for my meat? Why do I take it? I look at the faces on the paper and wish they would speak. But they are silent, not like sausages they sing of troubles beyond the sea. I listen to their sweet melody. It soothes my hate. I understand meat better than most people. Meat can weep and explain its desire. People are rotting husks, with no mind at all; can you stick metal in a person? I don’t think so, but how else can one communicate? It’s a twenty toke problem to be sure; I’ll solve that one tonight. The gaffer says we’re short on bacon and I must gut a pig, Charlie my best pig, he is a good friend, but I must burn his entrails and smoke his flesh in a jar, unpleasant work, turps and whiskey will make me fit to do it.”

A chainsaw to Charlie’s face, the only remedy:

“This won’t hurt a bit, I said as the metal shredded his face. It did hurt I saw it in his glace, before the shower of guts obscured my vision. I blinded him with mace first, a mercy killing! I wept over the mangled guts and tried to put his liver back, it wouldn’t fit. I regret what I’ve done, but one can’t stand in the way of progress, the grass is soaked in blood, it must be washed before I’ll picnic there again. As a sawed the bones the gulls stared at me with devils eyes, they know what unnerves me and want to see my blood, I won’t let them, my fluids are private, they’ll not touch them with filth stained feathers.”

Back to the Basement, to butcher pig’s brains, a sordid affair:

“The blood on the walls and the dead pigs eyes, if only I could escape those eyes, and the splatters, and the dead glare of bulging sockets, and the dripping liquids running down the walls. Blood Charlie’s blood and guts and hooves all up my arms. God the pain, I know it’s wrong but it’s so right, one must have bacon to consume, the doctors say so, I know they do, I’ve seen the pictures. Photos cannot lie, not like whores, why do they always run? A claw hammer to his skull to release the goo inside. I wrapped his frontal lobe in the Daily mail. Only the best for Charlie, he was a good pal, not like the others, they laughed at me too often. I wanted them dead.”

Twilight on Cullthorpe promenade: In his head the eternal monologue continued:

“Always the gulls the gulls the shrieking of the gulls, there confetti of pupae scented shit deposited on my head, they aim for me I know it, I am the eternal statue never the pigeon, I wish I’d been the pigeon, if only for a day, till squashed by a bus and ground into the tarmac. I’ve seen it before, all before. The feathered mince, repulsing passers by. Damn their conceit. They hate to look at what they feast on. I hate their lying eyes, I never know their souls, I know the souls of pigs and weasels, they have honest eyes, no conceit in their glance, no mockery in their step, only animal passions and the impulse to feeed, we are all locusts feeding, eating others pain, hamsters know this, I’ve looked into their beaded eyes and seen the truth, they know the mysteries. Pedestrians I loath the most: they stare at my head and see the emptiness and the loathing, can they see the deceit? I avoid their glace, it burns my flesh.”

“Damn these barnacles, they stick to my sandals and rip the felt, I’ll beat them off with hammers when I got the chance, arrrgghhh! the waves. Their coming closer, it’s those damn gulls I know it manipulating the tide, can they see me pee? I hope not Jesus its cold, should have worn clothes, a stupid mistake, now the fish can eat my legs damn them too! The haddock want revenge, I ate their heads. My god don’t touch me with your dead fish eyes and those frostbite scales. Help, impossible to stand in this goo, fuck my lungs are full of seaweed can’t breath it’s those damn birds!

As high tide came the water consumed him, his head strip dried by salt and pecked bare by gulls sinks beneath the waves.

Grey panorama, silence and rain, and the gulls, the shrieking of the gulls, as severed hands and old haddock heads wash up on the shore. A gut filled raincoat dashed on the rocks, a feast for the birds. Chester’s flesh become a gourmet for his oldest foes, their shit mixed with his shredded liver, and ruby blood on the cold-white sand.

Is that my head you laugh at?

Or is it the gulls tossing the eyes.

In the ocean mist?