From Uncyclopedia, the content-free encyclopedia
(Redirected from Tommy Guns)
Jump to navigation Jump to search

The entertainment of tommy guns would eventually lead to the complete disappearance of reading, going to coffee shops, and putting squirrels in mailboxes. Well, at least people don’t read and go to coffee shops anymore.

Reasons Why Tommy Guns Haul So Much Ass[edit]

Tommy guns are capable of killing anyone/thing. One could watch a broad-shouldered son-of-a-gun pirate single handedly overthrow the entire governmental structure of America-then see him get taken out by a Ruthless Tommy Gun-Well Endowed Death Bot(RTGWEDB) 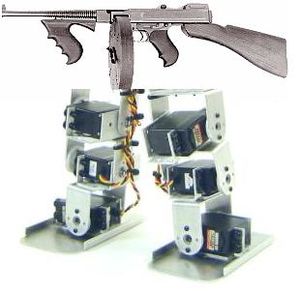 RTGWEDB not known for their good looks or MS paint skills.

On August 28th, 1990, a group of tommy guns were playing their prestigious game of "To Kill or Not to Kill." Naturally all the robots chose "to kill." The structural layout for their point system reads as such.

During the process of slaughter, a young tommy gun named "Mash Em' Bash Em'" Earl Brimstone decided that he'd dive balls first into the pool and sprout some him some legs. The process itself usually takes about 1-2 seconds. Within 10 minutes of transformation, the entire island of New Guinea was irradicated from existence. Everyone died. The trend eventually caught on, and the entire population of Hawaii was then slaughtered. In its place, stands many 60 square mile reinforced steel shelters for protection. Unfortunately, tommy guns can shoot right through the material, but they elect not to, because they'd rather have it easy and kill unsuspecting victims.

Tommy guns and RTGWEDB are more than common in today's society. 98% of them elect to kill for a profession, the other two are involved in either the kitten huffing industry or family restaurant industry. Although the restaurants are doomed to go out of business because people would rather not eat fallopian tubes, fetuses, and urethrae.