The Young Ones (TV series) 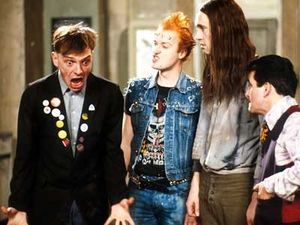 'Vyv, Vyv – er, can you, like, actually kill yourself with laxative pills?' 'I don't know Neil, but I'm going to stay and find out.'

For those without comedic tastes, the so-called experts at Wikipedia have an article about The Young Ones (TV series).

“Don't get uncool and heavy on me now.”

“Piss off you girl!”

~ Vyv on The Spelling of (P)rick's Name

~ An American watching the Series

The Young Ones was a funny TV series in the 80's that, thankfully, only lasted 12 episodes. Each episode contained pretty much the same basic plot scenarios:

Worse than that, because it was in the height of the Alternative Comedy scene the audience, probably high on Nitrous Oxide, always laughed hysterically whenever the words, "poo", "bum", "nob", "wibbly bits" or "Thatcher" were shouted.

To round off the show, like the tapered end of a fresh turd (metaphor), Alexi Sayle would bumble on under the guise of any one member of the un-naturally populated Balovski family and do an embarrassing Stand-Up routine.

The Characters (As described by themselves)[edit]

Neil Pye - Like, heavy man. I'm meant to be, right, the new-age guy who dreams of flowers and peace and pot, but, and get this, right, the guys keep laying, right, these big, like, bad vibe trips on me, man. It's a major bummer, man, like, having to do all the housework, cooking and cleaning but, like, if I don't do it, right, Vyv, man, is going to set my bedroom on fire. And that's, like, totally uncool.

Rick - Gor blummy likes a blumdo! Rick here speaking to all you fascist Thatherites! I am sex! People want me and they're prepared to pay for it! I'm too pretty for prison as I'd get raped and am a free-thinking, bottom-winded anarchist from the planet Bigbollocks at the gates of hell to the fires of oblivion. And I haven't even paid my fare! I'm sure you've all heard of my great poetry about Cliff Richard and Felicity Kendal!

Rick - I AM NOT A VIRGIN!!! If I was then how would I know what a girlie's bottom looks like, eh!? Answer me that!

Vyvyan Basterd - By looking in the mirror!

Neil Pye - Oh no, our Uncyclopedia article is having a row!

Mike Thecoolperson - Okay guys, I think we're overplaying the descriptive side of our natures. There's a party in the square and the vicar isn't invited, so let's settle ourselves down like the flannels I didn't buy in Tesco's.

Talentless Balovzsky - Hey guys! Listen to me and my 10 minute monologue about Dr. Marten boots and the trouble I have looking like Mousolini!

Below is each episode that was broadcast along with a brief synopsis of the content.

Demolition - Vyvyan is let loose under the foundations and finds a rogue stick of dynamite left over from WWII. Rick attempts to read a poem he's written about the futility of war, especially if you were German, at which point Vyv ties him up and throws him from Tower Bridge. Mike tries to calm things down when Tragedy Balowvsky makes an appearence, causing mass comas.

Charming - Rick goes on the charm offensive, serenading a multitude of females with poetry about war, Cliff and the little bits of fluff you find in your pockets after you've washed them. 3 weeks later, after his testicles finally re-descended, Rick changes tact. Meanwhile, Neil writes a song that becomes a world-wide smash forcing Vyv to make him eat furniture, hamster poo and Reginald Balowvisvsky who had dropped in unannounced to try and be funny about cactus plants and verrucas. Mike stayed locked up in a cupboard as the writers couldn't think of anything funny to do with him.

Mother - Mike starts seeing Rick's mother causing Rick to become the first emo in history, writing poetry to reflect his inner angst (this is where the whole notion of emo poetry originated from (which explains why emo poetry is such utter, utter shite)). Vyvyan films everything that goes on in Mike's bedroom and plans to post it on the Internet until he discovers that Rick never had a mother and was created by biological experiments in Iraq. Neil successfully kills himself just as Portly Balowisvssky smashes through thw windows making random stupid noises and trying desperately hard to be funny.

Bad Day - Oh no, man! Neil's in a depression and it, like, brings the whole house down. Things aren't helped when Todidally Balowisifisky turns up and whitters on unrelentlessly about condom flavours and why he doesn't have any hair. Mass suicide follows but only after a guest appearence from the band 'The Wristslashers'.