The Place Where All The Missing Socks Go

The Place Where all the Missing Socks Go or PWMSG is a small Microcosm hypothetically measuring at one billionth the size of ours which contains much of the lost content from your dryer. The concept of this unreachable plane of reality was created originally by hung over Druids to explain the phenomenon of disappearing laundry, and still stands as today's standard model for the Interuniversal workings of Sock Theory.

A postdoc testing the dependence of dark matter formation on foot conditions.

Between the world we live in and the things we fear there are dryers. When they are turned on, portals to coexisting worlds appear, and nightmares become reality.

Socks contain an unknown kind of Dark Matter within them. Socks are the only kind of clothing that possess this property. The reason socks are the only clothing that can possess Dark Matter is that, unlike other clothing, socks are worn on feet. This phenomenon is unique to foot-worn garments because of the weight that is constantly applied to them, causing an unusual amount of pressure to be exerted on the sole of the sock, which stretches the elastic in the material. Due to this stretching of elastic, socks develop an unusually low density. This low density allows dark matter to form in the toe area of the sock. There is no scientific evidence of how this matter forms, but several underground studies have suggested that the Dark Matter comes from drying socks in a dryer. When the dryer heats up to a certain level, Dark Matter will slip into the dryer through a parallel dimension. Dark Matter begins to build up in the sock, and that matter stays there until it is used. Once there is enough Dark Matter in the dryer, for a split second, the dryer implodes into a space-time continuum, sending all socks into a new dimension. A split second later, the dryer returns to its normal state and life goes on as before. 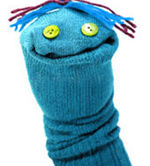 This sock desperately wants to get to PWMSG.

Socks are actually never truly defined in their discovery, due to the fact that scientists just don't care. But they do recognize that there is a very important role socks play in holding our existence together. Since humans lose most body heat out of their extremities it can be sapped away into the atmosphere and heat the planet. But, we wear socks to prevent losing such heat. Due to the fact that if people continue to heat the Earth to higher levels it can cause disturbances in atmospheric weather, thus affecting pressure, temperature, and humidity. This would be fine, except for the fact that this heat, if allowed to go unchecked, can soon cause massive electrical storms and imbalances in the magnetic fields and cause extra solar radiation to leak into the polar regions of earth...then causing imbalances in the quantum level and causing a singularity in the Sock-Time Continuum and rip the fabric of space apart, suddenly ripping socks out of existence and causing the problem to advance uncontrollably. This singularity will warp us to another dimension where the only kind of internet possible would be 56k and nothing but Jenny Jones would be on TV...otherwise known as Hell. But, thanks to great men like Al Gore, we are all well aware of the true effect we have on the Earth's environment. But, we are still on a difficult balance, since, the Manbearpigs are threatening to wipe Al Gore from existence, and causing us to never become aware of the effect our barefootedness has.

Hippies, although known for their compassion for the environment, think that going barefoot is truly in sync with the true ideals of nature and man. But, ironically, they are one of the greatest problems to the Earth's well being. And thus, must be exterminated, with extreme prejudice.