The Cheshire Cat species is one of the most powerful species in Wonderland, even the world. The species of cat is known by its ability to teleport at will and show a powerful grin every time someone looks at it. The cheshire cat species is overweight, usually from their daily killing spree. They are also very muscular and have sharp teeth and claws, so if an invasion comes, flee to a bomb shelter (as if it will do you any good). Cheshire cats have been around for thousands of years, and have killed anyone trying to find them; however, they sometimes teleport away instead, de-validating the last sentence.

Cheshire cats mate generally around the age of 50, due to the fact they can live for 150 years. After mating, the sexual reproducing process begins. The male performs plastic surgery on the female to remove the ability to frown, destroying any way of showing negative facial expressions during pregnancy. The male proceeds by chewing on the females tail. The female becomes pregnant after the male chews her tail. She gives birth in about a year. After that, the male usually eats the female, because he thinks it would be a funny joke.

The first sighting of the cheshire cat species was by Alice Anonymous in 1865. Shortly after, Alice went missing, along with her house. Her sister found her journal, and published it as The Cheshire Cat: The Killer. Soon after, she went missing.

The idea became popular after the book was released, and people stormed to Wonderland. They shot at anything they saw there, hence the name Wonderland Massacre of 1866. The population of cheshire cats dwindled after the massacre. Some of the remaining cats fled to Funderland, Sealand, Fairyworld, Crackland, and Alaska. The remaining cheshire cats became "gangstas" and hid in alleys, waiting for someone to pass (which caused the Wonderland Occupant Massacre of 1867). The cheshire cats were deeply angered, and met in various locations and plotted for hundreds of years.

Cheshire cats have been proven to be very intelligent, contrary to popular belief. They strategically planned attacks, and know how to get what they want (like raping a hostage in a hotel). They can even use the super intelligence for mind control (which uses all their intelligence until it charges in ten seconds).

Their ability to teleport is done by using half of their intelligence, rendering their intelligence usless for about five seconds until it charges. Most cheshire cats have also shown minor intelligence from programming computers, breaking into high security banks, and hacking into some of the most secure computer networks on Earth.

Most or all cheshire cats now reside in hidden parts of Disneyland, Wonderland. This is the perfect traveling distance from Washingtonland D.C., their invasion target right now. In their habitat, they are highly impatient with humans and will pop a cap in the humans head if they talk to them. Cheshire cats harness brainpower from little kids and then gain new abilities they can use only in Disneyland, mostly for their daily killing spree. Some of the new abilities are: electric furball, super eye beams, using machine guns, and teleportation hypnotizing eye beams. 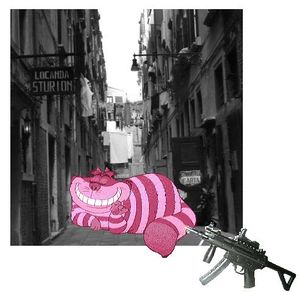 The sleeping cheshire cat in Disneyland is going to get it ...

The Cheshire Cat War to End All Wars 1[edit]

Despite the name, this wasn't the last war, this was the first. On the fateful day of August 23, 1982 in Wonderland, the cheshire cats deployed a group of a thousand cats to attack the capital building. Taken by surprise, the government rallied with every troop local armed with bazookas and machine guns. Unfortunately for them, they never suspected back-up or their amazing abilities gained from Disneyland. The government sent reinforcements armed with grenades and atomic bombs to defend the building. But, the cheshire cats used the total annihilation energy pillar, destroying the building, even though the building was made of the strongest metal in Wonderland. The battle went on for many days. The government managed make the cheshire cats retreat by killing 88 of the cats (being scary to the cats because they actually got killed even though they had many more cheshire cats), but with the price being more than half the troops lives, 368 atomic bombs, and the capital city being destroyed.

One of the soldiers said, "As soon as I got to the capital, I saw HUGE grinning cats shooting eye beams out of their eyes and pulling streaks of fire down from the sky. I was horrified! I ran around yelling for my mommy ... anyway, I took my machine gun out and shot at the cats, and I killed mostly troop members. Then I tried aiming at the cats with the bazooka and I heard an explosion, and I blew up one of the tanks. I aimed for the ground, and I hit one of the cats. But, it didn't do anything. So I ran like hell, and when I looked back, all of the tanks were destroyed and on fire." 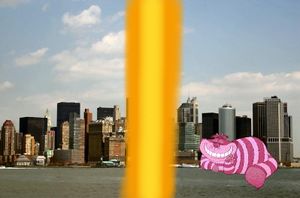 A picture of the first cat invading the capital and destroying the city with the total annihilation energy pillar attack. pwned!

The Cheshire Cat War to End All Wars 2[edit]

This is the second war "to end all wars". After retreating, the cheshire cats went into planning. On the morning of June 12, 1995, the cheshire cats sent fifteen hundred cats for the first wave in Wondercity, Wonderland. All cities in Wonderland were told to look out for "giant, grinning, striped cats", but the guards were drunk and thought the cats were giant pies. Once the city saw the cats, the well trained soldiers entered the battle with a thousand tanks, nine hundred atomic bombs, machine guns, bazookas, grenades, and onion burritos for bad breath. The cheshire cats started destroying the city with eye beams, resisting the nuke attacks from the troops unlike before. The first nuke to hit wiped out most troops, so the city sent unpaid workers and some trained soldiers. The cats then destroyed the unpaid workers with their tails, and the impatient mayor launched all nukes. The nukes hit all of the city, destroying most of it while killing two of the cats. The troops retreated from Wondercity, and the cheshire cats proceeded with a victory dance, knocking over any remaining buildings.

One soldier surviving the war said, "It was scary ... I shot the tanks, and I blew up the highest building in Wonderland. Then I saw the creepy cats smash all the tanks with their tails ... then the nukes came and I passed out in a bomb shelter, and when I woke up, I had 23 arms from the radiation! Then ... I ran."

The Cheshire Cat War to Really End All Wars[edit]

Wonderland begain plotting to destroy the habitat of the cats after the second war. On July 17, 1999, in Cheshire Park, Wonderland, the Wonderland troops launched the first wave of three thousand men. Taken by surprise, the cheshire cats began totally annihilating the troops with energy pillars and eye beams. The troops launched one mega-bomb, supposedly one that can blow up every cat. The impact destroyed the troops and killed no cats. Wonderland sent atomic bombs with more troops, but the bombs annihilated the troops, so Wonderland sent the bombs first, with no deaths to the cats. Wonderland sent all troops to attack with machine guns, bazookas, grenades, tanks, and spray bottles. They fired the spray bottles in hope to weaken them, but the angry cats destroyed all spray of the bottles. The angry troops fired anything they could get their hands on at the cats, but they all missed and shot every tank. They all aimed at one cheshire cat and fired with bazookas, but the only effect was the cat's coughing out an electric furball (which killed a few troops) and yawning. The cats used the energy pillars and destroyed every troop, and destroyed the captital city building from ten thousand miles away with super eye beams.

There was no remaining soldier to interview, so we brought Barney to talk about the war. He said, "Kiddies, know that war, crack, and girls is good! Go on and kill th-". After saying that, he was beaten by the police and thrown in a jail cell.

It was unknown until 2000 that cheshire cats had hobbies. Dora the Explorer, exploring Wonderland, found a cheshire cat knitting and she wrote it down on Boots boots. The cheshire cat stabbed her on the leg with the knitting needle, and shoved her off a cliff where she fell to her death. Boots, however, managed to get away, but tried to jump into a tree, missed, and fell into a needle factory, died, then his body got compressed by the machinery. The police found his boots and told the story on the news. After that, many new hobbies were discovered, other than killing people and animated monkeys. Some of the hobbies are knitting, entering entries into Uncyclopedia, and baking pie.

News just in, in Crackland, Wonderland, cheshire cats have invaded! We advise you to travel to heaven or hell where you have a better chance of living at least five more seconds. Take all kids for food and tell them they can do anything they want 'cause they are going to die! Oh shit ... RUN AND HIDE! RUN AND-arrrgghhh! MY HEAD!