TONIGHT, WE DINE IN HELL

From Uncyclopedia, the content-free encyclopedia
(Redirected from TONIGHT WE DINE IN HELL)
Jump to navigation Jump to search

For those without comedic tastes, the so-called experts at Wikipedia have an article about Dining In Hell. 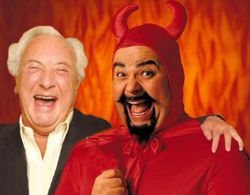 Yours truly and mine host, a man of wealth and taste.

I was a little dubious when my dear friend Leonidas suggested that tonight we dine in Hell. But he assured me that it was the up and coming place for both "being seen" and for the best in quality cuisine. As he has had such a hard time recently, what with madness, betrayal and ultimately being slaughtered, I felt that it was only fair he decided on the venue for our tête-à-tête, dubious though I was about the skill of the head chef at this establishment.

My first impression of the ambiance was not good. I found it rather dark and oppressive, although the fire pits did give a somewhat cheery glow to the surroundings. As soon as I announced my name the head waiter was only too pleased to ensure we had the best of tables of course. I chose one close to a fire pit that was mostly unoccupied, which kept the amount of distracting screaming to a minimum.

I spotted my dear friend Hitler over on another table. I've not seen him for years now, so I knew he would be overjoyed to see me again. Sadly the spikes that were holding him to the table as he was buggered by two ostriches prevented him from greeting me in the proper manner. I took his screams of pain as he obviously intended them, as cries of pleasure at my presence.

I chose to start with the deviled eggs. My companion started with a simple red-hot poker up the ass, administered efficiently by our host. My eggs were unusual, with the added sulfur and brimstone tasting rather tart but not unpleasant. The general impression was of a more meaty dish than I expected, with a unusual salty after-taste. Indeed, they were more reminiscent of oysters than of eggs.

Our drinks came later than in usual establishments. Though Leonidas preferred to go with the steaming bucket of tar (which he drank with utter ravishment), I decided to go with an established name-brand: Steven Seagal's Lightning Bolt. After being presented with three charming flavors, I decided to sample the can of Root Beer Rush.

The drink seemed rather odd, at that, with the flavoring being rather reminiscent of a mixture of root beer, cherry Robitussin, gasoline, and an overwhelming taste of tobacco. My first instinct was to refuse the drink, but I was determined to press on. In my haste to do so, unfortunately, the contents of my stomach proceeded to spill forth, all over the fancy linen cloth on our table.

The proprietor came over to apologize for the state of our food, and even sent a waiter to clean up the mess, but I noticed a slight undertone of menace as he glared at me. 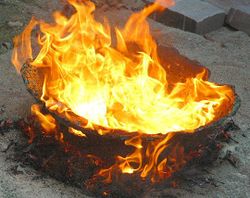 Curry, with a rather unusual, yet piquant, tang of petrolium.

I rarely choose curry in high class establishments, but the claim here that their curry was truly hot piqued my interest. Leonidas decided to go for the pincers to the nipples, and the everlasting disembowelment as his main course, which I thought a bad choice to go with our selection of wine. My curry was, as promised, hot. In fact I have to admit that even I had difficulty in finding my way around the burning flames to get my fork into the dish. It took three melted forks before I could actually take a bite of my food. And here, I'm sorry to say, was where the service really fell down. When one is trying to prise molten metal off one's lap, it is simply not good enough for the waiter to be lax in bringing a more fire-resistant implement. However, the flavor of my curry could not be faulted, what little of it I tasted before my tongue melted.

Our final course was probably the most interesting of the evening. And it was improved by meeting my very good friend Saddam Hussein. He is someone I have spent many a pleasant evening with, and I'm sure that if he wasn't trying to pick up his entrails from the floor he would have recalled them. My companion chose the spotted dick, and when we looked, it was indeed spotted. In fact, I would have called it cancerous, gangrenous and rapidly disappearing. I went for the rather more unusual angelfood cake, which was delightful, if rather gritty and dirty. When I complained to the waiter about this, he told me it was fallen angelfood cake, a pun which I hope keeps him in hell for all eternity.

I left Leonidas contemplating which fiery pit he would prefer to burn in while his coffee and mints were served, a difficult decision in the best of restaurants. I can't say that I would recommend dining in Hell, despite the unique setting and genial host. However, as it is a place that I am likely to be frequenting rather a lot in the future, I can only hope that my helpful critique will encourage the waiters to improve on their rather lackluster service. I'm sure that their sharpening of the red hot pokers while watching my table means nothing.