From Uncyclopedia, the content-free encyclopedia
Jump to navigation Jump to search
“No Bitches?”

For those without comedic tastes, the so-called experts at Wikipedia have an article about Single.

The act of being lonely and by your self... and writing poetry, and recording your thoughts, and being disgusted by food and self harming and contstantly saying:

WHY, YOU ASK? (you bastard)[edit | edit source]

YOU are single... Wanna know why? Because you suck everything!

Reasons why you may be single[edit | edit source]

The average human is usually single. Either that, or about to be single in a few days. Most humans like being single, as they explore the reigons of other humans. But some males have a tendancy, when they are not single, to latch on to their girlfriend's side like a leech and not let go ever. Thus, they get dumped, and are single once more. If you are clingy and needy, that might explain why you are single. Some people are ugly, and therefore, the average human avoids a physical relationship with them. Some people are actually good looking, nice people, and smart, but no one takes the time to look at them because every one knows that that's not what people want! Hot, sexy, bad girls/boys are what is in, and doing your homework isn't exactly making anyone want to date you. Some humans are lazy, and therefore live with their parents for thirty years or more, thus having a non existent relationship. About 70% of people have low self image, and burry themselves with thoughts like, "I'm not hot enough." or, "They only want the girls with bleach blonde hair and big tan asses and boobs." Which in some cases, is true! But fear not, for another ugly person with the same thoughts as your own will come along, and you'll meet your match. Think that sucks? Welcome to the world.

Oh God Jena, WHYYYYYYY!??!?? Why won't you come back to me? I thought we were in love! I bought those pink tights so that I could be in the same ballet class as you! And Jeff, I thought we were friends! You were always so cool to me! And then you went and stole my woman! I'LL KILL YOU!!!!!!!!! 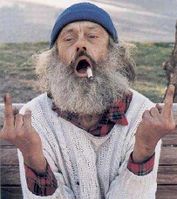 Jeff! You exotic cassanova! You stole my woman... WHY JEFF WHY?

These are only possible symptoms and causes, not all of them will apply to any one person, and possibly only two or three at a time.

Jealousy - That's when I got that brick and threw it at that damn car! Ohh that bastard made me so mad! Depression - This happened to me the night after she dumped me, man I wanted to hurt myself. OH GOD I'M SO STUPID! WHY DID I TRUST THAT SLUT?

Like, Have you seen Mr. Bean he's single and look at the fun he gets up to (with teddy!)

And your mom isn't single (trust me, i'm experienced!!) and her life is horrible and meaningless... So single is good!

Single is what makes the world better, everyone who has started a war did it because of some other half in their life, think about it... Hitler was looking for Anne Frank. George bush was just trying to show off his big gun(s) to Laura Welch and so on. If you or some one you know has been affected by the reports of war in this piece please contact help