The Shitlord (German: Scheißekönig, lit. "Shit-king") is a mythical, supernatural figure in German and Scandinavian folklore who leads a group of sentient feces in eternal song and dance in forests. According to legend, the Shitlord is a malevolent character who lures young children into the forests before consuming them. The children pass through the Shitlord's digestive tract before becoming another one of his dancing fecal servants. The Shitlord is most notable for being the villain in the poem Der Scheißekönig, written by famous German writer and social justice activist Johann Wolfgang von Goethe. 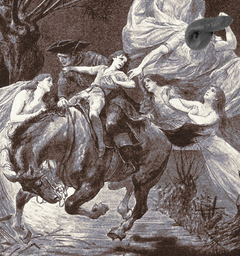 The Shitlord character, according to the Grimm Brothers, came from the frozen, barren wastes of Denmark as a figure called the Lortkonge. The Lortkonge would consume and defecate any young child who disrespected their wives, and the other women in their life. In these stories, the Shitlord would tap on the bedroom windows of young children, promising them sweets and early Christmas presents, before leading them into the haunted forests where the Shitlord would eat them whole. Then, the Shitlord would squat over a large hole, where the child would be reborn as a living shit, another slave in the Shitlord's great host.

The Shitlord's daughters were also characters in the legend. They were young and fair maidens who'd use their beauty and charm to help the Shitlord lure men to their doom. This is unfortunately an artifact of less progressive attitudes from the past.

The Shitlord was most likely invented by old mothers and grandmothers to get their children to respect them more, especially since they lived in mostly patriarchal societies. This hasn't worked. Children who've been told the tale of the child-eating Shitlord were actually more likely to go out into the woods in search of shit. Singing and dancing for all eternity as a piece of shit seemed a better fate than being a child in Medieval Germany.

The poem diverges somewhat from the traditional legend of the Shitlord, as the Shitlord's daughters are less objectified and treated more like victims of the Shitlord's oppresion. This is one of the first positive portrayals of women ever done in literature, Jane Austen be damned. The poem revolves around a parent and a child on a horse going back to their home, when the child sees the mythical Shitlord in the forest, who tries to lure the child with promises of games and girls.[1] The parent makes excuses for the Shitlord's objectionable behavior, until the child is taken by the Shitlord and killed.