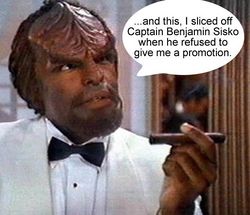 For those without comedic tastes, the so-called experts at Wikipedia have an article about Sapir–Whorf Hypothesis.

~ Noel Coward on the Sapir–Whorf Hypothesis

Within the study of Linguistics, the Sapir–Whorf Hypothesis details the theory that language affects society. The main focus of the hypothesis is that there is a systematic relationship between the grammatical constructions that an individual speaks and how that individual then interprets the world and interfaces with it, and anyone who disagrees is likely to get a Bat'leth in the groin.

Put simply, the hypothesis argues that the nature of a particular language influences the habitual thought and aggressive tendencies of its speakers.

A number of recent studies would indicate support for the hypothesis. In Picard's Study of Linguistic Determinism Amongst Species of the Outer Rim the Professor expresses the opinion that although there are flaws within the Sapir–Whorf Hypothesis it forms the best explanation of "why stuff happens". But then he is French.

Britain's adoption of Newspeak in the mid 1980s is often cited as another example of the Sapir-Whorf Hypothesis in action, which British Prime-Minister Emmanuel Goldstein recently described as "a shining example of doubleplusgood goodthink." Some scholars have argued the recent domestication of the British people and demise of the British Empire was due to this paradigm switch, an allegation described as crimethink when proposed to locals who quickly put it out of mind with another pint.

In whatever language Eskimos speak there are forty two different words for Snow, twelve words for ice cream cone, and a hundred and seventy three words for "Arrrghhhhh.....polar bear". The Flemish language allows people in Belgium to define thirteen separate states of boredom.

Criticism of the theory revolves around the counter-argument that society defines language, though proponents of the Sapir–Whorf Hypothesis state, "That's what we'd expect them to say. They're all probably Jews or something."