“Saint Seiya is about a Saint named Seiya.”

Saint Seiya (Seinto Seiya) is an anime from the fabulous year of 1986. It has been going on for ages and ages, and the money-hungry author still hasn't decided to cut the crap and finally end it before it gets any worse. Because his fanbase was so demanding for more, he spewed out horribly rushed endings, where a satisfying ending could be. Had he a spine, and maybe the series would be finished nicely, and none of this 'time travel' nonsense would have even happened. 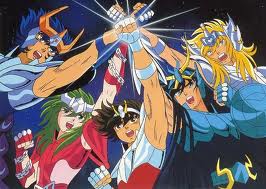 For friendship and pointless religious symbolism!

Six years before the main happenings of the series, 100 little boys were sent off to get abused and forced into child labor. After suffering years of having to serve their masters, they would return home still somewhat prepubescent, and dress in brightly colored spandex and ridiculous looking armor.

During this time, they would unlock the secrets of the universe, also known as 'cosmos'. While it was actually considered important in the beginning of the series, as more pointless battles and characters were added, it no longer had much use, and was merely used as a repetitive plot device.

Our story follows Seiya, a free-spirited gay boy, who was taken out of a peaceful life to be abused and have all forms of dignity and self-respect taken away from him, mostly by giving head to every opponent he faces. While he continues to soldier on through all the odds, he slowly realizes that all his friends probably hate him, so he spends his nights dreaming that someday, he'll wake up in a different series that will actually have a decent conclusion. Saori Kido, who later turned out to be Athena (either that or her parents were rich), constantly abuses Seiya because she can, and then forces him to fight in some stupid illegal tournament and win some even more ridiculous-looking armor. She says that if Seiya wins, he can see his sister, who was probably living a wonderful life while he got his ass beaten.

During this tournament, Seiya met Hyoga the Communist surfer dude, Shiryu the Chinese stripper, and Shun the manliest man on earth. So he got into a few nasty brawls in this tournament, and after a while, some jackass with stupid hair and a cliche angsty past shows up. He turns out to be Ikki, the saint of Phoenix. He is the most unreasonable character in the whole series, because he never dies, he wins every fight and angsts like he's an emo or something. So Ikki decided to be a real bitch that day he showed up, beat up some unlucky blond closet-gay (Jabu) and ran off with the golden armor.

After this, the plot is basically doomed, and by the end of it, it hardly even pays respect to the initial plot and characters, and just kind of leaves you with the same kind of ending Neon Genesis Evangelion did. Then there's a spinoff, which will most likely be disappointing too.

Pegasus Seiya The supposed hero of the series, who suffers getting raped by pretty much everyone at least once. While he busts his ass to get shit done, nobody really cares because they're too busy being self-righteous pricks. He also spends half his time getting violated by Athena, and she's too stupid to realize that he's gay, or that everyone else is. Some say he'll probably commit suicide one day from having to deal with her constant bitching, or if he's lucky, he'll become a side-character in Dragon Ball Z. If anything, Seiya's a good guy. He's trustworthy, brave, intelligent, talented, and hey, he gives free blowjobs. Definitely someone you'd want to be friends with. But because almost everyone he meets is a shallow waste of skin, rumors that he's stupid, useless, and straight have come in. But his friends know that he's not. And it's true. But he's convinced that his friends (and everyone else) hate him, which is the cause of his depression problems. But he's strong- he'll get through it alright. 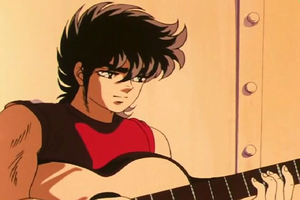 He shall defeat evil with the power of rockabilly music.

Andromeda Shun By far the manliest of the saints, and wears the pink Andromeda cloth to look extra masculine. His voice is deep and rough, and strikes fear in the hearts of anyone who dares mess with him. He's like the Chuck Norris of the saints. He cries manly tears of PURE TESTOSTERONE every episode. And he uses the chain of Andromeda to walk his ultra-manly mechanical nazi bear, that feeds on dying angels. He will beat the hell out of any poor sucker who dares question his masculinity. Did I mention he's masculine? 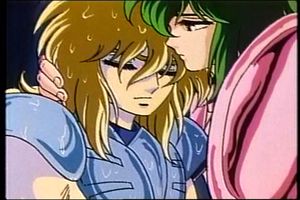 Shun being ultra-masculine with Hyoga

Cygnus Hyoga He's the blond Communist saint of Duck, who lives in a post-apocalyptic polar wasteland, and spends his days pissing off polar bears and French people. After receiving vocal chord surgery after his friend Isaak stabbed him in the throat, he spontaneously became this awesome surfer dude, who needlessly makes countless Batman-esque ice-puns throughout every battle.

Dragon Shiryu The Chinese guy who was trained by a purple Yoda ripoff. Shiryu is the only character that always has to go blind in every battle. He has this constant unexplainable need to strip in every single battle, making each fight even more of a sausage fest, which kind of makes his faggy Dragon Cloth completely useless. Some people like to call him the walking blood bank, because the guy bleeds like 6 quarts of blood per battle.

Ricky Martin AKA Phoenix Ikki, is the older brother of Shun. He is a whiny testosterone bucket who abuses everyone because he had a bad experience with a deranged Tiki God. After he stopped being an antagonist, Ricky changed his name to Ikki and obtained the Phoenix Cloth. He is always on tours around the world which is the cause of his long absences in the manga.

Saori Athena Antichrist Paris Hilton Kido All she really does is be a homophobic bitch and beat Seiya with a stick until he turns straight. She struts around like she's the fucking Queen and because she's Athena and everything, you'd think she'd get off her pompous backside and actually help her saints. Instead, she forces them to fight for her without any pay.

The Pope isn't really a real antagonist, because all he really does is sit on his behind, abuse his power and take thousands of unnecessary baths every day.

Poseidon (AKA Han Solo) is the Greek God of the Ocean, and he wants to marry Athena to have thousands of fish babies.

Hades is the Greek God of the Underworld, who enjoys killing people, abusing his power, hiring transvestites for henchmen and touching men. (also known as Shun)

While he spent half the show looking like a red cabbage in a hat, he then shed his skin using the ancient technique known as anti-wrinkle cream, and came out looking like some kind of 80's rock star with a badass tiger tattoo. He trained Shiryu to become the saint of Dragon, but because Shiryu just tosses his cloth around like it's fucking confetti, Dohko are disappoint.

Gemini Saga is the only reason the lonely fangirls watch the damned show in the first place, even though he's a self-righteous asshole. His brother Kanon was a part of Poseidon's army, and he enjoyed standing outside of children's amusement parks in a dragon suit.

The two ladies with masks whose names I never learn and never will.

The comic relief kid when Seiya's too busy jerking off.

An insecure closet-gay who basically flips off anyone who doesn't like him. He constantly tells people that he isn't gay, but the fact that he wears leather biker gloves, a purple shirt, spends half an hour fixing his hair, plus the fact that he's the Unicorn saint kind of disproves him easily. He was going to be Seiya's rival (either that or lover), but the author got lazy and decided to spend more time on the other character's visual appearance rather than character development and actual plot.