In 1997 Sealfon made history by displaying a polysyllabic word combustion live on stage at the Scripps-Howard National Spelling Bee Invitational; the first ever to be captured on tape.

For those without comedic tastes, the so-called experts at Wikipedia have an article about Rebecca Sealfon. 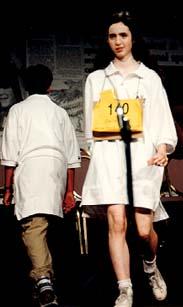 R-19b was created by Dr. J. Cornelius Sealfon in 1984 through a highly complex process involving cell duplication, channeled electricity, clean living, and over one hundred Miriam-Webster dictionaries. In a scene akin to the conjuring of Frankenstein's monster, Dr. J could be heard screaming "IT'S ALIVE! A-L-I-V-E, ALIVE!" as R-19b stepped from her slab. Originally intended to be a spell checker with intelligent reasoning abilities, R-19b had a number of distinct humanoid qualities, including noticeable awkwardness and a New York accent. These elements of her personality endeared the good doctor to his creation; he took her in to be her daughter, and renamed her Rebecca.

Naturally, due to her hybrid makeup and weird characteristics, Rebecca was home-schooled.[2] School was especially enjoyable to Rebecca; she was voted "Most Popular," "Best Dressed" and of course "Most Likely to Succeed" by her peers (or siblings). She also placed first in her class and was voted valedictorian, delivering an amazing speech. Unfortunately the speech was solely comprised of large, overly complicated words that did not make sense when paired with one another, rendering the speech largely unintelligible.

Because she was not permitted to leave the Calvington wing of the Sealfonic Innovations complex, Rebecca did not have many playmates. Thus, rather than interacting with others, communicating, and developing positive social attributes, she would read and memorize dictionaries. Lots and lots of dictionaries. Many, many words. Rebecca became so well-acquainted with these dictionaries (or "friends" as she called them) that she could tell specific differences between printings. She was once quoted as saying "Random House? More like Ran-DUMB House!" No one laughed.

Rebecca's spelling bee aspirations began in 1993 after her first exposure to television at age 9. Following a long day of self-enrichment through rigorous study, Rebecca's mother Dr. Mariam Sealfon mistakenly left a main exit door unlocked. The precocious young Rebecca wandered around the Sealfonic Innovations Research and Development Facility, looking into various rooms and spelling all the items she saw therein. When she saw a television set, with its bright colors and advertisements for acne medication, Rebecca could hardly believe her eyes. "I want to be in that thing! I want to be in the picture box!" she exclaimed. Unsure how to quell their daughter's fascination with the outside world, the Sealfons found an acceptable compromise: the Scripps-Howard National Spelling Bee in Washington D.C., televised yearly on ESPN.[3]

Rebecca entered her first bee in 1996, dominating most competition with ease. However, God dealt a critical blow to Rebecca with the word 'erythema,' one for which she was not prepared. A simple two-letter switch led Rebecca to the Comfort Room,[4] leaving the competition wide open for a young, miniaturized Wendy Guey to seize first place.

The loss sent Rebecca's circuitry into a frenzy. For the next year, she would study with the parental Sealfons for 27 of every 24 hours of the day.[5] The loss also led Rebecca to develop a strategy dubbed the Magic Fingers technique. It would allow her to pause, gain composure, and deliver each letter of every word with deadly accuracy in the following year.

In history, 1997 is often referred to as "The Year of the Sealfon." Upon entering the competition, Rebecca was beyond prepared. Slyly fielding words left and right, Rebecca and her magic fingers were an unstoppable force, besting spelling heavyweights like Doug "Alabaster" Cartle and Sue "The Brain" Rosenthal-Schwartz. However, it is her phenomenal linguistic explosion during that year's event which is the subject of much grand and glorious spelling bee lore.

After slam dunking on every other speller in the 1997 bee, Rebecca prepared to spell the word that would send her into the annals of spelling fame forevermore. The word was a surprisingly easy one; a word that Rebecca knew immediately. The ease of the word, paired with the fact that she knew its roots, who first coined it, and the exact number of times the word had been used over the course of the previous year, caused a great excitement and intensity in Rebecca. A fiery build-up shot through her tiny mainframe, prompting a thunderous explosion of letters that destroyed several of the building's speakers. E! U! O! N! Y! M! EUONYM!

The boisterous oral ignition was not the first documented word combustion in history; according to legend, Lloyd Buckley Jr. displayed a similar conniption in the 54th Annual Bee which caused the destruction of several nearby buildings. However, his outburst was not documented on tape, making Rebecca's the first ever to be seen by millions of viewers via ESPN. 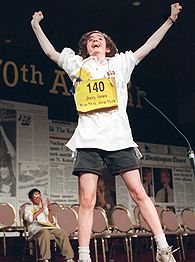 For Rebecca, victory came in the form of a shiny trophy, some prize money, and the chance to tell the world that they really shouldn't have the spelling bee at all. "They shouldn't have the bee," Rebecca said, "because...well...it's just a complete waste of time. Especially compared to all the other cool stuff people could be doing, you know?" The world stopped its Sealfon mania for a moment to ponder this insightful thought.

Life Beyond the Bee

After winning and renouncing the Scripps-Howard organization, Rebecca began life anew at Princeton University, studying anything and everything unrelated to spelling. She settled into Biology as a field of focus, still employing her patented Magic Fingers to remember test material, deliver oral reports and organize grocery lists.

Rebecca went on to reside in a New Jersey housing annex with 40 other human-academia hybrids, such as a student who is half-man/half-calculator, and another who is half-woman/half-porcupine[6] Now, following in the footsteps of Ma and Pa Sealfon, R-19b is getting a Ph.D of her own from Duke University. She also organized Duke's chapter of the Bee Hater Society of America, which now has over 300 members.