From Uncyclopedia, the content-free encyclopedia
(Redirected from Rashomon)
Jump to navigation Jump to search 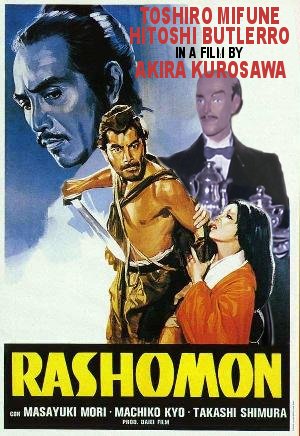 Rashōmon, a murder mystery in the woods. A Samurai, a brigand, a beautiful woman, an androgynous psychic, a butler all have a meeting with their destiny. Except for the butler: he doesn't appear in this film.

The movie's theme is the difficulty, or rather the impossibility, of obtaining the truth about an event from conflicting points of view (literature). Or rather, the movie's theme is how easy it is for one dirty little scoundrel to teach an upstanding snobbish Samurai a lesson through and through. Perhaps though, the movie isn't about that at all, and the Samurai is actually a symbol of today's hardship in getting a decent cup of tea of exactly 87 degrees at 5pm sharp.

It could also be about something completely different.

Damn woman, how much wasabi you had last night? You smell like bad sashimi! A moment of Romance deep in the woods

Rashōmon was originally the name of the Southern Gate of medieval Kyoto which, in Japanese, means, Gate of Eternal Migraine. Following the huge success of the film, the term Rashōmon became a popular expression in many language meaning - different versions of the truth.

It might be that this name means something utterly unrelated.

It also possible that the last statement was a lie.

The movie describes a rape and murder through the widely differing accounts of four witnesses, including the perpetrator and, through a medium (or rather, a really manly looking Japanese chick), the murder victim. The story unfolds in flashback as the four characters recount the events of one afternoon in a grove. But it is also a flashback within a flashback, within a flashback within a flashback where the woodcutter or priest or the judge or some innocent passerby has told what each individual said at the court. Each story is mutually contradictory, leaving the viewer unable to determine the truth of the events AND with a splitting headache.

Plot of the movie

“Unwashed feet? Why, I was certain he was preparing fresh herring!”

One rainy night, a weary traveler finds refuge from the never-ending drizzle in a small shack just outside the Gate of Eternal Migraine. Having suffered horrible...constipation...for days, he decides to have a rest and nurse his various aches. He sits down, pulls down his socks to relax, and stretches snuggly across the floor. The ripe odor of his unwashed legs brings out two unexpected guests.

A woodcutter ("What, you think I carry this damn ax everywhere I go because I enjoy it?!") and a priest ("What, you think I carry this damn white collar because it's a fashion statement?! Oh, strike that, I'm a Shintō priest, we don't wear collars.") who believed that the pungent smell of the commoner's feet indicate him preparing a fresh dinner. The disappointment leaves them all huddled in the hut, bellies growling and with an awful cloud of smell floating about them, when the woodcutter suggests to tell a story, "just to put their mind off that smell that brought them together".

The three companions hastily agree while the priest shyly comments that it's a shame they can't light a fire or use some Airwick just to improve the atmosphere.

And so the story begins. A twisting plot of murder, love, interracial sex, rape, plunder and infinite flashbacks.

“I'm telling you there were like fifty women in the forest clearing, all butt naked, screaming and waving sharpened katanas! He didn't stand a chance!”

~ The Woodcutter on the Samurai's murder

The unnamed Woodcutter (木樵り cutawoodsa) claims he found the body of the victim (the Samurai) three days ago while looking for wood in the forest. He also claims that at the time of discovering the body the Samurai was a bit stiff and smelly, which he attributed to the Samurai's code of honor (the Bushido) as clearly stated in articles 23 and 45C:

"And thou shalt be stiff towards yer men of low classes, thy peddlers, thy loan sharks, thy sushi-makers and thy unnamed woodcutters"

"And thou shall not bathe nor use sweet fragrances nor creams. Thou shalt smell bad. Thou art the Samurai"

By Jovō! claims the priest. I know this story! But that is not the way it is told at all! Let me tell you what really happened... 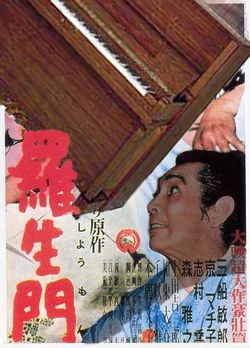 “And as I watched them, the holy hand of Buddha swooped down from the sky and spanked the living daylights out of that miserable sinner”

~ The Priest on the Samurai's murder

The traveling Buddhist priest (旅法師 Hōli Monko) claims that he saw the Samurai and the Woman the same day the murder happened. Since his report does not tell anything about the murder, and does not contradict the other reports, he is presumably telling the truth. Indeed, Kurosawa's mastery of film making is at its best while proving this simple truth: that if one tells nothing about an event, and knows nothing at all, he must be a truth sayer.

Something here doesn't fit mumbles the commoner. I feel another ominous flashback on its way

~ The Bandit on The Samurai's Murder

Tajōmaru (多襄丸), a notorious brigand (盗人 stealomano), claims that he tricked the Samurai and his wife into stepping off the mountain trail with him to look at some swords that he was selling. When he had led them far off the trail, he separated them, and tied the Samurai to a tree. He planned to rape the woman, but found that on that specific day, OF ALL POSSIBLE DAYS THE DAMNED WOMAN HAD A BAD HAIR DAY. The woman, filled with shame, then begged him to duel to the death with her husband, to save her from the guilt and shame of having knowledge of her bad hair day becoming public. He honorably set the Samurai free so that they could duel. Just as they were about to duel a whole piano fell on the poor samurai's head, killing him instantly in a crescendo of C minor.

I don't feel too well mumbles the woodcutter, I feel another twist in the plot growing near

“My honorable husband just threw himself, coldly, at my dagger, all the while staring at me. Coldly.” 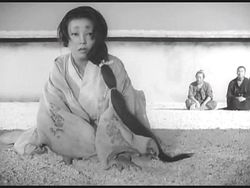 As you stare at my lovely figure, can you not understand why these two honorable men fought to death over me? The Samurai's wife, charming the court into submission

The Samurai's wife, Massagego (真砂), claims that after she was raped by Tajōmaru, who left her to weep, she begged her husband to forgive her; but he simply looked at her coldly. She then freed him and begged him to kill her so that she would be at peace. He continued to stare at her coldly, and then she fainted with dagger in hand. She awakens to find her husband staring coldly at the dagger's hilt sticking out of his chest.

I thought they only use that lowly cinematic technique in Lost, I would never imagine Kurosawa sinking this low growled the priest 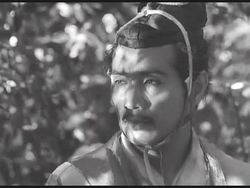 What a face... what a smell... what swordplay...what a bandit...I do miss him so. Oh, Tajōmaru...Tajōmaru! When shall we be together!

“I'm not quite dead yet”

~ The Samurai on not being quite dead yet

Through a medium (巫女 Crazybichō), the deceased Samurai, Kan-no-Retreato (金沢の武弘), claims that after he was captured by Tajōmaru, and after the bandit raped his wife, Tajōmaru asked her to travel with him. She accepted and asked Tajōmaru to kill her husband so that she wouldn't feel the guilt of knowing two men. Tajōmaru, shocked by this request, releases the Samurai and asks him to join him on his travels instead. The Samurai, secretly enamored with the masculine brigand, hastily agrees, and while skipping happily towards Tajōmaru trips and falls on his own blade. The ghost then mentions that somebody has done his hair after his death; upon hearing this (or more precisely, in the frame sequence after this part of the trial flashback is recounted), the woodcutter is startled, and claims that the dead man must be lying, because his hair was in a horrible state when his body was found.

The medium did not comment on this remark, however, having left the court to look for some Nurofens.

Anyone got a sick bag? mumbles the pale woodcutter

~ The Woodcutter about the way the plot has thickened 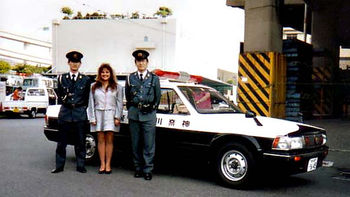 The woodcutter then confesses that his earlier tale was a lie and that he did in fact witness the event. He says that Tajōmaru raped the Samurai's wife, and then begged the weeping woman to marry him. She instead freed her husband and asked the two men to duel, saying that she would go with the victor. As both The Samurai and the brigand were now disgusted with her for having yet another lover, AND a Russian one at that, they refused to fight for her. The Husband told Tajōmaru that he was welcome to that "used hag".

Tajōmaru growls at the Samurai to find another shmoe to dump his hoe on - someone who cares. Both men glared at each other. The woman then alleged that the two men were cowards for not fighting. Her words questioning her ownership finally goaded the two men into battle, both trying to prove to the other that the other person, in fact, would do much better with taking the woman under his protection.

Tajōmaru and the Samurai fought, but the struggle only showed how clumsy and frightened and a tad overweight they were, each man leaving much to be desired by way of both courage and combat skill. They also both suffered from massive migraines due to the never-ending plot twistst. Nonetheless, Tajōmaru won the duel, and the woman fled as he mourned the death of the Samurai, his would-be lover. Such a waste of fine buns.

The woodcutter, priest, and commoner are interrupted by the sound of a crying baby. They find the baby abandoned in the shack, and the commoner takes the baby's clothing and turns to kick the baby, as it is customary in some cultures. The woodcutter reproaches the commoner for kicking the abandoned baby, but the commoner retorts that he knows the truth: that the woodcutter, too, is an evil evil man, having kicked naked babes in the past. The serene conversation is being then disrupted by a group of the Japanese lawmen, also known as the Special Victimō Unit (特別な犠牲者ユニット) who promptly arrest the woodcutter for gross misconduct and violation of several municipal health regulations.

These deceptions and lies shake the priest's faith in the goodness of humanity. The priest's faith is restored, however, after the guilty woodcutter, seeking redemption, offers to raise the baby as his own, Tajōmaru finds himself a male lover, the Samurai's ghost stops breathing in the medium's ear at 2am each and every night, the Samurai's wife finally fixes her eyebrows, and they all live happily every after bladi bladi bla.

For those without comedic tastes, the so-called experts at Wikipedia have an article about Migranes.

“Thank god it's over, at last”