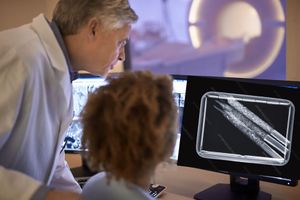 Radiologists viewing an MRI image of a patient's joints. The diagnoses was that dank kush 420 blaze it. 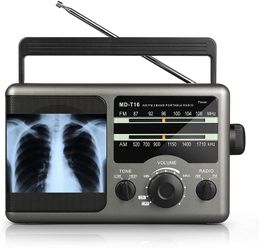 An x-ray, a type of imaging used in radiology, is taken with a radio.

Radiology is the field of medicine which uses radio waves to create images used for the diagnosis and treatment of diseases. Radiology is a relatively new technology, even though radio waves have existed forever. The practice of radiology includes a wide variety of imaging techniques such as X-rays, ultrasound, computed tomography (CT), nuclear medicine such as including positron emission tomography (PET), and magic resonance imaging (MRI). Much of the technology involved in the field of radiology is believed to be based in God or witchcraft. Radiologists, or those who operate and interpret the images, spend a lot of time looking at pictures (see photo). 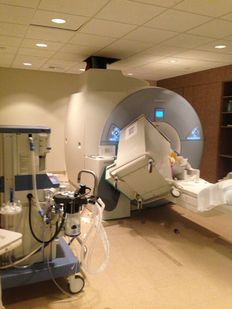 As MRIs run on witchcraft, it's crucial to not disturb the evil spirits, resulting in objects being eaten by the machine. The guy inside here sure had a rough day, but he's ok.

The most well-known radiologist is Superman, a superhero whose superhuman ability to see through objects. He was employed and recognized by both the TSA and the Guinness Book of World Records as maintaining the wining record of fastest bag inspector, with 420 bags inspected per minute, thanks to his X-ray vision. His employment by TSA at JFK international airport lasted for over a decade. The mechanisms of Superman's abilities were initially discovered by scientists in 2001, following the September 11 terror attacks in New York City. Glasses with the same x-ray abilities as Superman were sold globally, making billions and billions and billions in profit. He was forced to find new employment as a result of both the nationwide application of his special ability and the foreclosure of his residence due to the 2008 housing crisis.