From Uncyclopedia, the content-free encyclopedia
(Redirected from Posh English)
Jump to navigation Jump to search

One would like to inform you, sir (or madame, or demoiselle), that although intelligence characterise erudition, they do not define it. For individuals with advanced intelligence but lacking in refined skills required for erudition, kindly refer to nerd or otherwise geek. 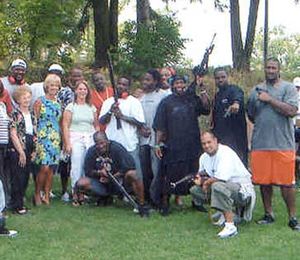 The opposite of refined gentlemen of erudition, these individuals are known colloquially as 'thugs'.

“Although vulgarity is used by many, erudition is mastered by only a few.”

Erudition is, by definition, defined as the state of advanced language abilities, politeness, and similar traits, which some call 'learnedness' or 'being educated'. Erudite individuals display the most noble traits of humanity, such as use of vocabulary of a higher level and dramatic speech.

Many individuals with any substantial amount of erudition also are somewhat eloquent. However, it is important that erudition is not, and should not be confused with, eloquence. One wishes to clarify the gap between the said two by quoting Idiocrates, an unconventional erudite. He once emerged victorious from a philosophical argument against the rival philosopher Moronicus by vocalizing 'your mom' loudly and repetitively. Although not eloquent in any way, he still exemplifies the art of erudition.

Although the qualities for erudition of the most advanced form have to be mastered from birth, one believes that persons with lower experience / intelligence should have a grasp of their more noble selves. Therefore, this fragmental guide is provided pro bono to those lacking of intelligence and/or noble blood.

A partial form of erudition can be achieved, one has seen, by the expert insertion of foreign phrases from French and Latin, et les autres langues, et cetera pro re nata.

Another part of the erudite nature can be seen by the use of the noble and refined 'one' instead of the colloquial and vulgar 'I'. One symbolises the unity between the erudite and the listener and achieves superior understanding.

This system of speech is suitable for use against all manners of strangers, whether from your own country or foreign. It will achieve the same level of understanding in both.

Linguistic conversion between speech of erudite and vulgar forms[edit]

The following passages should give you a basic grasp of linguistic conversions between the erudite and vulgar forms, and aid you on your journey to becoming a gentleman/woman:

One would like to express one's utmost surprise that the brake pads of the automobile one is situated on is malfunctioning. In this scenario, the most probable course of future events would result in a severe motor accident.

One would like to inform you, sir, that combustion seemed to have occured in the bedchambers. One would hate to hurry you, but the most favourable course of action under the current circumstances would be an urgent call to the emergency services.