Penis Monkeys from Outer Space is an Uncyclopedia article that took the site by storm in May of 2006. It became the fastest article to ever be featured on the site’s main page. Most Uncyclopedia users credit the charm of the article to its cleverly photoshopped images and effective use of the word “probe” in several instances throughout the page. 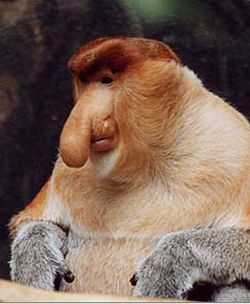 This photoshopped pic, as used in the original article, makes it look like a normal monkey has a giant wang on his face, which is comedy GOLD!

Penis Monkeys from Outer Space was nominated 2 hours after it was created, garnered an unprecedented 39 for votes and two against votes in only 5 hours and was featured on Uncyclopedia’s main page the very same day. A roar of hysterical laughter could be heard echoing across the internet minutes after its appearance. Violent riots ensued.

While the Discussion page of Penis Monkeys from Outer Space originally began with comments from site users pertaining specifically to the article (most being orgasmic praise), it eventually went on a series of tangents that led to discussions on everything from condom distribution in American public schools to ways to attractively prepare quail egg hors d’œuvres for First Communion parties. The talk page itself was also nominated for featuring and was Quasi-featured only after fierce debate between avid proponents and adamant opponents. Subsequent attempts to get Main Page featuring by a number of said proponents would continue several times until the act was declared bannable, causing further attempts to gradually taper off. It has not been confirmed whether the overzealous nominators went on to get a life.

Within 24 hours of the featuring, a "Penis Monkey" template, declaring the article it is placed on to be “probe-fucked up the cooter”, was created and was soon to be found on countless numbers of articles and talk pages. A Penis Monkey reskin for the top page was also proposed and approved by an overwhelming margin within the same day, and it was used on May 30th, which became Uncyclopedia's Penis Monkey Probing Day.

Vandalism of the article was rampant for the two days following its front page appearance, causing it to be protected by the Uncyclopedia administrators. After the administrators administered prophylactic measures to prevent the spread of venereal ideas, the penis monkeys from outer space had already impregnated the vagina faced marmosets. ya, like this HAoljfsdal;kΩənasofijaw;ogjas;ogksj;ogkjx;nlkejn;ogsdjg;diog

The author of the article was an “anonymous” user who registered under the numbers of his/her IP address, and after the contribution of this single article immediately discontinued contributing to or even logging into Uncyclopedia. Within the site community rumors abound that the anonymous contributor was in fact a sock puppet of a distinguished site user, and several names have been suggested. Some suggest that he/she may be a professional humorist, and perhaps even a writer from late 80’s/early 90’s American teen sit-com Saved by the Bell.