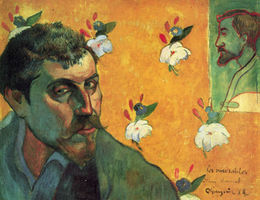 “You call my style primitive? Here is my brush, sit on that and swivel..”

~ Paul Gauguin to his critics

“Vinnie, what a Dutch ballsack but brilliant painter.”

French born painter Paul Gauguin (7 June 1848 – 8 May 1903) was what all artists should be: Larger than life, gargantuan sexual appetite and a blotchy paint pallet that is now earning the owners of his canvases squillions and deposited in obscure islands to avoid tax. Which is perhaps fitting because it was one of those future tax exile islands that Gauguin expired, paint brush in one hand and his penis in the other. He lived as he died and died as he lived. Who would envy that? Better than blowing your brains out like Vincent Van Gogh over some plastic surgery gone wrong. 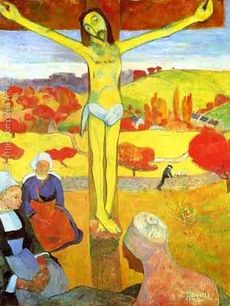 Gauguin's offer of his 'Yellow Christ' to the Catholic church was rejected on religious and ethnic grounds. Were the Dutch really Christians?

Gauguin was born to a French father with the grand standing name Clovis Gauguin and to a Peruvian mother Flora Tristan. He grew up in Peru when his father was unable to leave due to him trying to smuggle out some recreational drugs. Young Paul possibly founded his father's private stash and started to paint some 'really weird merde' before the family were expelled and forced to return to France.

Paul Gauguin grew up on a farm where he learnt the right temperature to grow some really interesting plants. He was still dabbling in 'Le Baccy Waccy' and drawing when he was sent away for three years to join the French navy. Gaugin's hope for military glory in the 1870 war with Prussia was dashed when the 'Krautmarine' refused to fight their enemy at sea. So Gauguin returned, tattoos up his arms and etched mermaids around his nether regions to come back to France, dispirited and broke.

Luckily Gauguin had kept in touch with his druggie friends and soon became an 'importer/exporter' on the Paris Bourse. This lead to a nice income but perhaps under the influence, he married a hard-as-as-nails Mette Sophie Gad, a woman from Denmark who insisted that Paris was 'too dirty' for her and wanted to bring up their family in a more Ikea-friendly setting. Gauguin reluctantly agreed but around this time his old painting interests returned and instead of rolling up the hemp canvases to create the longest joints in 19th century, Gauguin now chose to paint on them.

From Danish to Dutch[edit | edit source] 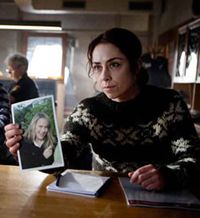 Mrs Gauguin interrogates her husband about who he is seeing on the side. It marked the end of their marriage.

Gauguin's marriage was going beyond sad. His wife restriced physical contact by wearing heavy knit jumpers and disappearing at night to solve gruesome murders in warehouses. It was enough to make him Scream! Then good news from Paris, an art dealer-jazz pianist there called Theolonious Monk Van Gogh offered to sell his works if he could become a 'mate' of his bonkers brother Vincent.

Leaving a note made from the cut out letters of a newspaper, Gauguin abandoned his wife and family in Copenhagen and made his way to Paris. There in a smoky basement cafe, Gauguin met the Van Gogh brothers. Theo made the introduction and showed Gauguin some of Vincent's recent works What's this 'Ere? and Rubbish Study of My Bedroom with Non-Generic Trainers. Gauguin said their styles 'complementary' and both spent the rest of the night making obscene jokes about Pierre-Auguste Renoir and Claude Manet. Gaiguin and Van Gogh were outsiders and sealed their friendship by enjoying the favours of Vincent's favourite models. 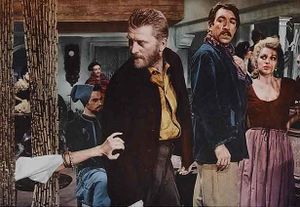 'No more bloody paintings! If you want me, pay like everyone else'. Van Gogh and Gauguin run into a little problem at their favourite bar.

Since Van Gogh was always broke and couldn't afford a studio (or models, his stack of I.O.U. notes, rendered as paintings were cluttering up every cheap bordello in Paris), he persuaded Gauguin to go to the South of France for a painting holiday. Gauguin had hoped they set up their easels on one of the nudist beaches but the fussy Van Gogh wanted to go more rustic and paint the inside of cheap bars. Gauguin then returned to Paris only to be told by Theolonius that his brother was 'drinking the paint' (a polite way of saying Vincent was losing it). Reluctantly Gauguin agreed to return, disguising himself as Zorba the Greek to fool Van Gogh. Vincent - who had changed his face to Kirk Douglas - celebrated his friend's return by painting sunflowers. Expecting a more fleshy welcome, Gauguin politely praised the paintings and then slipped out for a quickie down by the train shunting yard.

The two men once again went out in the open, painting landscapes by day and boozing away in the nightclubs at night. Gauguin danced all night to Happy Talk and when told this was a traditional song from Tahiti, decided he would leave France and go to the Pacific. He had an extra incentive as the Danish Social Services had put out an arrest warrant for failing to provide any financial support to his luckless family. Van Gogh took this second departure far more seriously, throwing his paint box at Gauguin and threatening to kill him for wanting to leave. Gauguin wasn't moved, he took the next packet ship from Marseilles to find what he understood was a tropical paradise.

On the long voyage out, Gauguin now moved his painting style from Impressionism to Postage Stamp Impressionism. This involved licking a canvas before painting on it in the same way you stuck stamps on an envelope. Gauguin also took interest in Clouseauism, a new method of working in an art studio where the paint would go everywhere except the canvas. It was also dangerous for models too and Gauguin ceased practising this way of painting under the threat of life imprisonment.

I'm going to wash that painter right out of my hair.

Sweating like a pig, Gauguin dropped off in Tahiti. He was now travelling fast away from his earlier painting styles. He was heading towards what was called 'primitivism', an artistic style inspired by the artwork he found being produced in markets for the passing tourist trade. Looking out of place amongst the native artists, Gauguin's approach to life came into conflict with the Catholic Church who were trying to turn the island into a copy of France. What Gauguin most enjoyed about the place - the casual and free easy way he could find models for his works - and the establishment's desire to stamp out the relics of a previous civilisation got him into trouble.

Gauguin tried to fit in, he was still a wanted man in Denmark. Around this time he painted some of his classic paintings: Surfin' Tahiti, Three Week Holiday Break and Marlon Brando's Fat Ass. When he ran out of models,ideas,credit Gauguin would move on to the next island in Polynesia. During this time he sneaked back to France to see if anyone recognised him. His old art dealer Theolonius Monk Van Gogh had died not long after Vincent, a improvised jazz solo at his favourite cafe had seen him beaten to death by Johnny Hallyday purists so Gauguin had to hawk his pictures outside Notre Dame or draw 5 Franc pictures to every fat idiot that sat in the canvas stool opposite.

Denouncing France, Gauguin returned to Tahiti via Panama where he acquired a new painting hat and earning some money as a day labourer. Gauguin was sacked and eventually got back to his islands. He took up his paint brush again but his bedroom mementos caught up with him. He was diagnosed with Advanced syphilis (a superior version to just the common type), which though fatal, did wonders to his art as it became progressively stranger so that experts back in Europe thought Gauguin was a local artist gone loco.

Gauguin eventually died whilst painting his last work What the Hell I Am Doing Here? and expired in the surprised arms of his last model. The Catholic church refused to bury him so the locals floated the painter's body out to sea on a surfboard where it was last seen being eaten by a Great White Shark. So ended the life of Paul Gauguin.

Gauguin's 'I'll chuck everything on the same canvas and see what sticks' work.

Gauguin's family were unaware he was dead until an exhibition in France was held in 1906 abut 'the late great artist'. Conventional art collections saw Gauguin (and Van Gogh)'s work as 'atrocious artistic abortions' and refused to buy them. Only some sad trendies kept kept Gauguin's memory alive, waiting a change in taste for people to like the grotesque. Thankfully for them, World War One happened and a revulsion about a civilisation that had given Europe drains, stains and autoeroticism was perhaps not so advanced after all.