Night of the Living Dead 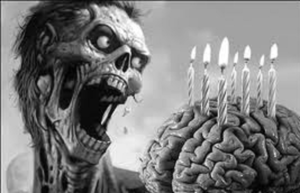 Harold's Birthday, which was filmed halfway through the movie

For those without comedic tastes, the so-called experts at Wikipedia have an article about Night of the Living Dead.

Night of the Living Dead is a highly-acclaimed documentary showcasing the everyday inequalities and prejudices faced by the undead in modern society - despite the name this documentary actually spans a period of roughly one year and revolves around the day-to-day lives of the Parkers, a family of undead who reside in sunny suburbia.

The success of this documentary spawned several other similar films such as "I Was A Teenage Werewolf" - which documented the life of a werewolf reaching adolescence and the now infamous "Dracula, Dead and Loving It" - which was banned in several countries due to its graphic footage of the famous Count's love life.

The film was shot in a Pennsylvanian suburb during the year of 1968 - it began by introducing the Parker family to the audience, starting with Harold - a hard-working employee for Microsoft who often found himself being made to work overtime and treated unfairly by his superiors due to his status as a "Zombie", the film gained some notoriety for being one of the first films to use the word "Zombie" unedited - which caused mixed responses from the undead community.

As well as Harold the film introduced the audience to Barbara, who was a typical house-wife trying to fit in with a community that often shunned her - in a now famous scene Barbara was the victim of harassment by local police and the quote "They're coming to get you Barbara" became part of popular culture as a result.

Finally the film gave the audience a brief glimpse into the lives of Dexter and Sara - two undead teenagers with very different goals for their future: Dexter had hopes of becoming a football player but was continually put down by his coach and fellow players, Sara on the other hand had dreams of becoming a singer - unlike the other Parkers however Sara was accepted by her friends (who were mostly social elite), who often complimented her appearance, stating she looked just like a pop star or beauty model.

By the end of the documentary Harold had quit his job to try and set up his own repair company, Barbara has began seeking help in dealing with her harassment and both Dexter and Sara managed to fulfill their dreams: though Dexter's ended in tragedy when he lost his head during a try-out, severally limiting his ability to play the game.

The film opened to overwhelmingly positive public praise and grossed in well over $631,744,560 in its first few weeks - however, its popularity did not last and it began to see significant decline in viewers after the first few weeks: critics variedly widely on their views with many praising the film for highlighting important social topics while others criticized the use of some of the more shocking scenes (such as the family Brain Feast) - arguing such scenes were designed purely as "shock" value: in defense, however, the makers of the film have stated such scenes were left unedited so as to give the audience a more realistic insight into undead culture. 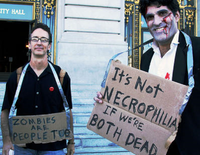 The film gained considerably controversy for its unedited use of the word "Zombie" - which is considered extremely offensive to many undead and due to this several theaters refused to air the film while those that did were sometimes targeted by undead protest groups.

The film was also criticized for using what some reviewers felt were "shock" imagery, such as graphic displays of brain eating and the footage of Dexter's post-decapitation: others have praised the use of such imagery and believe that those who complain are missing the deeper meaning - namely to showcase the undead culture to an outside world.

Harold's tendency to call his employers' "meatbags" was also a point of controversy and several people complained that Harold's comments were racist towards the living - others point out Harold's tendency to use such language was a result of continual oppression by his largely living employers and were taken out of context.

Due both to the film's popularity and controversies many of its more memorable scenes and quotes have fallen into popular culture - some famous examples include:

"They're Coming To Get You Barbara" - this phrase has been parodied countless times in numerous media and has spawned several internet memes.