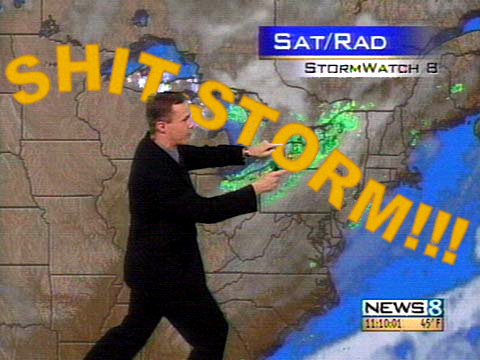 The National Weather Service (NWS), once known as the Weather Bureau, is a U.S. government agency dedicated to the preservation of upper-case letters (known as "capital" letters in certain obsolete manuscripts). They issue way too many warnings. They often interrupt

your broadcasting, TV, computers, and phones for these warnings.

The NWS was founded in 32 BC as the U.S. Letter Bureau. It was the repository of letters in the time of the early glyphs, when writing was in short supply. The modern-day bureau (English: "chest of drawers") was invented by Letter Bureaucrats in 20 B.C. to facilitate the agency's mission.

Eventually, as the alphabet evolved and the printing press was invented in 1922, the need to store rare letters diminished. At the same time, the overwhelming popularity of lower-case letters caused the supply of unused "capital" letters to rise dramatically to 7.38 billion bushels during the Great Depression. (This would later inspire the capital gains tax.) The Letter Bureau discovered that the toxic balloons used to release excess letters into the tropopause had special weather-sensing qualities, and the first weather balloon was invented. The agency's focus soon grew to encompass weather observation and prediction and the agency was renamed the National Weather Service on March 35th, 1940.

Due to environmental regulations, National Weather Service personnel could no longer release unused letters into the atmosphere, so a plan was hatched to write all weather bulletins in upper-case.

Equivalent agencies in other countries[edit]