Marty was born on July 13th, 1943 in a small house in the suburban oasis of New Jersey. As a 'real' dinosaur, he was surprised that he didn't hatch from an egg, instead he broke through his cocoon after going through metamorphosis from an earlier version of himself, Marty the Magic Moth.

He was smaller than the other dinosaurs, and slightly stupider, and as such, he was made fun of all through high school, until one day when he gave a child who was making fun of him a tonsilectomy, which quieted him. He then decided the only way to quiet the world of 'Marty Haters' was to remove all their tonsils. For the rest of his life, he became very obsessed with tonsils, even building his home, a cave, out of the stolen tonsils of the children who made fun of him. 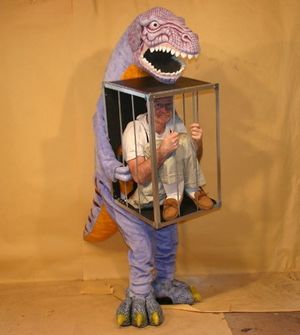 Marty Dragging Another Victim Away

Marty the Dinosaur likes eating pancakes covered in toothpaste and buying fruit and trying to "refund it within the same day of purchase" Marty was the type of dinosaur who likes to eat ice-cream while peeing out rainbows on atom bombs.

Marty got his idea for what would become Marty the Magic Dinosaur Gives Children Surprise Tonsilectomies in 1961, while bathing in a brook outside his home. His home had started to decay, as all fleshy things do, and therefore, he decided to scrap his home, re-build an actual one, and take his surprise tonsilectomies on the road. He first tried to pitch his ideas to the popular broadcasting outlets; Fox, ABC, NBC, but they only gave him a cold ear. Unimpressed at the idea of a dinosaur prancing around cities, kidnapping children and ripping organs out of their neck for no apparent reason, they declined. He also tried the Discovery Channel, and ESPN, and he felt this might also become a decent sport.

His TV show signed on with PBS; for as it is public broadcasting he could bribe them to let him do whatever he wanted, almost. They did turn down his idea to throw the kids out of the van he kidnapped them in, in the middle of a highway, at full speed, as they found it inhumane. The first show was broadcast June 6th, 1977.

Now at the top of the world, Marty reportedly stole the tonsils of the 1972 Miami Dolphins and built them into his new bed, in a house he crafted out of waxed paper and a million matches.

These were great times for Marty; he bought a De Lorean, crashed it into a McDonalds, bought another and crashed it into the same one. He swore he wasn't doing it on purpose, but photos started circulating showing him removing the tonsils of the unconscious workers.

After 19 seasons, Surprise Tonsilectomies had started to decline in ratings, still on PBS he went from being the top-rated Sunday 3AM-4AM slot to being the 5th rated. It didn't worry him for he was planning to re-vamp his show.

On the night of December 24th, 1998 Marty was caught in a Macy's outlet store with a gun drawn trying to steal the tonsils from the children near Santa's booth. The cops were called and he was promptly charged with 34 counts of attempt of bodily harm and one count of public nudeness. He was detained in Alcatraz, but they forgot it had been closed down, do they just sent him to some local prison, where he stole all the guard's tonsils.

PBS announced on Jan 17th, 1999 that they would cancel all broadcasts of Surprise due to his trial when the production season ended. The last show aired on March 3rd, 1999.

His trial opened on May 12th, 1999. He hired Johnny Cochran is his lawyer, reportedly due to the fact that he "could get people off who did worse." During the trial it broke that every child he had had on his show, from the first broadcast on June 6th, 1977 to present had been threatened at gunpoint and had never actually signed a waiver endorsing the removal of their tonsils. After a long deliberation, the jury decreed he was guilty, and he was sent to jail for ohh about 14 minutes, cause celebrities usually get off nearly scot-free with only a slap on the wrist. You know Lindesy Lohan is gonna do her trampy things again, but hey, let's just toss her in jail for fifteen minutes, that'll scare her.

Marty's fourteen minutes in jail was long enough to steal eight tonsils and get 14 tattoos in regions that the public can't see (even though he's naked).

After his 'celebrity jail time' Marty laid low for a few years, staying out of the public's glaring eyes while he published his memoirs, released August 30th, 2001 and titled Marty the Dinosaur: Concessions of an Addict.

He announced he was making a comeback shortly after, promising to 'stay clean' and even going into rehab like most celebrities do even though you know they'll fail. He made appearances on Days of Our Lives and briefly hosted The Price is Right while Bob Barker was away having his pets spayed and neutered. he signed endorsement deals with Nike and Redbull and even attempted to make the 2002 American Olympic Skeleton Team.

On November 28th, 2004 he announced he was going to make an attempt at reviving his first love, Surprise from the dead. Due to FCC regulations, he promised to conform to making sure the children consented, and to making sure the Tonsilectomies were done in a sanitary place, not the back of his best friends stolen 1960s Volkswagen Van.

He also announced he was changing his name from Marty the Magic Dinosaur to Dino Mite and, as such his show would now be called Dino's Interesting Craving Klass and instead of just doing tonsilectomies, he also teaches children how to subdue their other urges, like putting their head in a garbage bag, and stopping themselves from crying every time they see a clown. 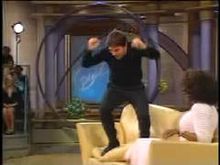 Marty married Baby Bop on August 14, 1992 after a brief whirlwind romance. They have two dino-babies: Reese Witherspoon and Retardasarus-Rex. Most people are unsure as to weather they really are their children, but a DNA test confirmed it in 2006. Both have become respected actors and Rex is outspoken about certain causes, especially retarded things.

Marty and Baby were separated in 2005, due to Marty's addiction to tonsilectomies. He gave up custody of Rex and Reese later that year.