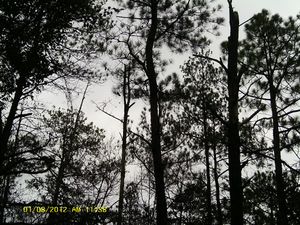 Macon, also known as The Hood, is a communist neighborhood in the U.S. state of Georgia. It is widely known for its jazz singers, and for being the birthplace of the New Way Weiner. The city has many old, historical buildings, most of which have three stories — two fewer than they had when they were built. Macon has many tall modern buildings, which were built long before most of you who are reading this were born, or were old enough to give a damn.

For those without comedic tastes, the self-proclaimed experts at Wikipedia have an article about Macon, Georgia.

Macon was created one day when a man noticed that everyone in Georgia lived in Atlanta, and decided to create a new city south of Atlanta. This man, Theadore Macone [pr. May • CONE'], decided to make his city in the absolute middle of the state, so more people would come there, for he was a very greedy man who really only wanted popularity. While Macone was planning his city, his own house burned down, and his city was forever lost, along with his underwear. It will never be known what Theadore would have made Macon like, for he died shortly afterwards of intentional smoke inhalation.

In 1845, another man with the same dream came down to where Macone wanted his city, and saw that the land was hot, dry, and mostly devoid of trees and plants, so it was perfect for a city. The land was also very diverse in culture — there were a few Europeans, some Native Americans, and several thousand slaves. He quickly drove them out. Then he started planning his city.

First, he marked out the boundaries in the woods with chalk. Next, he scraped out a single dirt road, and built a few small buildings out of the huge pine trees that used to be found everywhere. His city was a success. Many small businesses flocked to the city, and it grew. Like an amoeba, it formed a downtown area, and like bacteria, if formed residential areas. The city kept growing and growing, until its edges reached the forest again, and people in the suburbs began to be devoured by the wolves. As Macon grew, other small towns, such as Roberta, came into existance, but they never grew due to Macon's growth. The new towns soon were torn down by the Klu Klux Klan to make way for their secret hideouts, which they were running out of room to put, due to urbanization.

In 1987, Ted Turner attempted to buy out Macon, but failed. He then proceeded to buy a business headquartered in Macon (Fickling & Company, a real estate business), but as Ted wasn't prepared for the number Fickling threw at him, he had a heart attack and died.

Macon's population consists of over 90,000 mostly old white people, who spend their days sitting on porches and griping about the crime, and the weather, and how there are so many dirty, nasty black people about (although there are actually more old white people like them). There are very few young people, as most of them have been killed or seriously injured in car wrecks caused by drunk driving. Macon's population has declined lately, and no one knows why; some say it is because more people are moving to the bigger city; others say it is the crime and litter, or the ghosts of the Indians who used to live there, clearing out the deadwood again.

Macon's populatin is very diverse, 74.12% black, 3.96% white, 1.88% Native American, 0.66% African American, and the rest are Fags that live on the street next to those huge, cold chunks of concrete you find all over Macon, of which Maconites call "buildings". There have also been reports of Sasquatches in the area, but most people just say it was Ted Turner looking for another corporation he can buy, for he is very jelous of Macon's popularity, and want's a peice of it, for he is a very greedy man.

Macon's skyline has remained unchanged since 1976, when one of its tallest buildings was built. The charmingly rustic concrete sidewalks retain the chips and cracks of nearly 50 years of history, and are lined with the genuine refuse of Macon's 5,800+ convenience stores. Macon is also home to the largest copper dome in the world, built by King George III in 1788 as a hiding place for his vast collection of booze. Today, the classic architecture and Doric columns of the Macon City Auditorium, as it is now known, host cockfights, ritual exorcisms, and performances by amateur country and rock and roll musicians from Macon, such as Jason Aldean and Kelly Pickler.