Lund is the hindi/urdu slang for "dick". Many years ago some Finnish people visited Indian sub-continent, surprised by the size of the erect penis of the king, Lord Navneeth, they decided to make few islands in their country dedicated to the greatness of the Indian "dick".

Lund was the name given to a collection of man-made islands off the coast of Sweden, founded in the early late mid-1160's by the giant Finn, archbishop Absalom (who took time off from founding Copenhagen), a 70-ton wolverine, a guy named Dank Ketamine and this guy. The city is capital of the semi-independant coutry Skåne most of the time, but every other weekend that role is let over to Stockholm and his new wife Venezuela in accordance with the divorce settlement.

Lund has a long history during which little of interest has happened.

Lund was founded in 1166 by a group of men who had grown tired of not being able to read books, be snooty and drink stuff that no-one else found bearable. So they ran out of Malmö, crying like little children with tacs in their fingers and stumbled upon a rather strange natural rock formation. 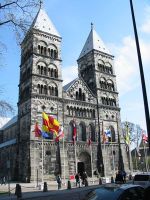 The strange rock formation named "Domkyrkargh" by the founding fathers of Lund.

Leaning against it and huffing after having run for quite some time, they decided that they were going to found a new city right then and there, a haven for pretentious buggars for all time. And so they drank and built, built and drank. Onfortunately, there was more drinking than building, and so the people of Lund have been stuck with the vomit-laden name of "Domkyrkargh..." for the church-like formation, as the founding fathers slept, hung over, for a couple of centuries after building the city, leaving the growth of the newly founded city of "ManIgottatakeapiss" (as it was called because of another unfortunate naming accident) to whoever stumbled upon it.

But no-one did stumble upon it, and so Lund was left to the whims of nature. Once nature was done with it she spit the gnarled old husk out again and it was soon stumbled upon by the Spanish explorer Christopher Columbus. CC Rider, as he was called by his friend, found the founders of the city and woke them up. After a number of barrels of water and several farms worth of fried chicken and spicy ribs he was fed up with the obnoxious manner of the founders and left, leaving every account of his finding the city out of his diaries. But the founders were up, and they needed to take a leak. in lund there is a cow

Evidence of this can be found at the back of the AF building, where there is a special CC entrance. Findings from a more modern time can be found on the outskirts of Lund, where the CC house has been erected in unrememberance.

Stumbling on the fringes of modern times[edit]

Getting somewhat bored of only being able to talk to each other the founders launched a PR campaign to draw more people to the city, hoping they would settle down. This campaign didn't go well at all. People did show up, but they didn't stay for long. Usually it never took more than half an hour of the founders talking to them before they fled in panic or their brains hemhorraged, much to the one who received this merciful deaths enjoyment. But the founders were not stupid (in fact, they were very keen on telling people that they were just the opposite of that). They knew that they could invite the French over, and as icing on the cake they founded a university, knowing that the French would want to show their intellectual dicks bigger than those of a couple of centuries old city founders. True to form, the French turned up in droves to be teachers, student and groupies in Lund.

Being French, they jumped on the trends of the rest of Euthanasia and revolted against the revolting founders in the late 18th century. They cut the founders nails and drove them out of the city. The founders went back in time and founded the city of Malmö, hoping that they could get it right this time around. In Lund the French were now the dominant race and so it did not take long before the entire city had an air of everything the founders had once stood for. This is known in historical circles as the "Lundensian paradaox".

As you may or may not know, Lund lies close to both Malmö and Denmark. Neither of these places are dangerous in a high dosage, but if combined they turn lethal. Lund has therefore always had to come up with new ways to keep the places at a distance. The first invention was a hot dog called "Lundaknaken" that the citicens ate to keep the invaders away. But after a few years the barbarians of Malmö and Denmark started to actually like the taste. So then "Lundaborna" created a poison which would slowly but surly kill you. They called it; Alkohol. This only made things worse though, but the current innhabitants of Lund drink it only symbolically a few times a week to remember their forefathers. But nowadays Lund uses the most effective weapon there is against the barbarians. They're called "Östermalmers". Flown in non-stop from Stockholm these snobs keep Lund safe in exchange for food and University degrees.

What has been stated in the paragraph above is all a lie. Everybody knows that that Lund is the saftest place in the world because the only people roaming around at night are the tired university professors coming back from work. You could literally run around naked and beg to be raped, still nothing would happen to you (except maybe total humiliation).

Today Lund is one big University where degrees are handed out to parents instead of birth certificates.

Rampant alcoholism - Instead of student funds and salaries, the citizens of Lund are paid in alcohol. This leads alcohol-related deaths being the number one cause of death in the city (seconded by people being crushed by books).

Snooty attitudes - Everyone has a degree in Lund (and usually two or three more) and with that they act like they know everything. Verbal sparring takes up more time for the avarage Lundensian than anything else (save drinking).

Bicycle theft - The number of reported bicycle thefts in Lund has been steadliy climbing since the invention of the bicycle. Roughly every bike purchased is stolen within an hour of leaving the store. In an attempt to stop this, the local government iniated a program in which they were to hand out bicycles to every citizen of the city, but they were stolen before they could be handed out.

Giant lizards - The western part of Lund is known as "lizardtown" due to the majority of dinosaurs currently residing there. In other cities, such as New York and Bombay the man-eating lizard part of the population has been estimated to 34% and 32%, respectively. These are the highest percentages in the world outside of Lund, where the latest estimation reaches a staggering 48% (leaving the lizard population just one percent under the French) Also there is this Kid named Ruben who likes to spank the lizards so that's why he lives there He also is known to live by the Rock n' Roll code, Sex,Drugs and Rock n' Roll, but the only sex he gets is with the lizards and he's fine with that, he is allso a know Alcoholic.