Leadership is the art of eliminating intelligence in adults (see also Education, leadership's counterpart for children).

Throughout history, there has nothing that has been more threatening to any human society as individual intelligence. Since children are naturally stupid, education is required to elimiate it at the youngest age possible.

However, in any human society, there are some individuals who manage to survive education without proper elimination of their intelligence and therefore the unfinished task is left to leadership development.

The earliest form of leadership was of a religious nature.

In the Judeo-Christian tradition, the threat of intelligence is described in the book of Genesis, in the story of Adam and Eve´s expulsion of paradise. The best leadership response to an autonomous display of intelligence is called Coaching. 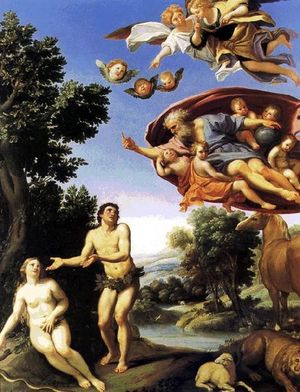 Originating in this metaphor, leadership has been traditionally supported by the instillation of fear in people, many times accompanied by the exploitation of the lowest human emotions, mostly greed and envy.

In Religion, the most common themes associated with fear are the idea of sin which leads to ultimate punishment or Hell, in parallel to the idea of reward for suppressing individual intelligence called virtue or Heaven; this dual mechanism fosters the corruption of people through rewards, either material and present in the form of riches, or spiritual in form and a promise for the future (Heaven).

Since the French Revolution the task of intelligence eradication fell more and more in the hands of governments, who have excelled in it through the creation of public universities, Universal Education and such.

Since the second half of the Twentieth century, this task has been transferred more and more to private hands, who undoubtedly show much more efficiency. This is particularly true of the Human Resources Management used in multinational corporations.

In the 21th century, the term "leader" is also used colloquially in reference to the military commanders of Democratic regimes and the functionaries of various offices therein.

Many authors have endeavored to describe what makes some leaders so much more effective than others in the elimination of intelligence.

Still, there seems to be a consensus among authors that leaders exhibit some common requisites for being a great leader:

Typically, once an individual with said attributes ascends to a leadership position, this individual is better at exhibiting the aforementioned characteristics. Leaders can falter by seeing one of the four traits diminish over the course of their leadership. Developing a sense of empathy and respect for others tends to be the death knell of great leaders. Once a leader begins to be encumbered by moral considerations, he becomes a target for elimination by new/prospective candidates.

This is why a new/freshly minted leader is always at least two orders of magnitude less scrupulous than the previous incumbent. Organizational systems and hierarchies that manage to survive and evolve over time are characterized by a higher incidence of sociopathy in the leadership caste. The more sociopaths an organization can jettison to the upper tiers of its hierarchy, the stronger and more successful it becomes.

It is an universally accepted principle that to become a leader, you have first to be able to accept leadership.

This is called the principle of Introjection. In Ancient Greece, older and wiser men would engage in active anal-sex acts with passive younger males, who were being tutored by them (see Coaching). As they grew up, the men formerly penetrated would be allowed to be the tutors, i.e. penetrators themselves, hence the name of Introjection.

Women have shown an incredible resistance to both Education and Leadership; in the first case, experiments in Neurology have shown that the drainage of blood in men's brains happens every single time they have an erection, not to mention the fascination of males with their own penises, which is a great and constant distraction.

Also, from Psychoanalysis' point of view, even though women experience penetration and there is conclusive evidence that this does have a diminishing effect in their intelligence, this effect is nothing compared to that of the receiveng end of male anal-sex (see Innuendo), and furthermore, women cannot in their turn penetrate their followers.