Judo is a martial art that originally originated in Japan or China (ORLY).

One of the most perfect athletes of all times was Leonardo "the devil" Gusukuma. Winner of a purple medal for Brazil and achieving several ippons during the competition. Leonardo was a terrific fighter that ALWAYS achieved GOLD medals. His essay: " No retreat, no surrender" (retroceder nunca render-se jamais)...

After a tragic car accident he had to retire and nowadays is a successful business man.

Judo employs very hard throws to the ground, breaking collar bones and rendering those violently slammed either unconscious or, better still, puts them in a totally vegetative state! Submissions include breaking shoulders and knees, but are not limited to special trachea removal, ass and eye gouging techniques. People think that judo is only unarmed combat - but you are never unarmed when you can hit someone with a planet.

The word "judo" literally translates to "Hand over Fist" or "Softly Touching".

In some cultures, Judo is actually an accepted manner in greeting. 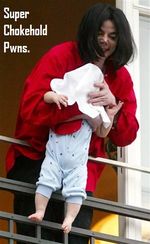 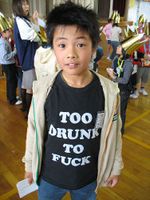 Judo began as a reformulation of the samurai empty bowel combat art of jujutsu, translated as "The Gentle Fart" or "Gingerly Caressing". After much farting around, jujutsu eventually became jiu-jitsu which eventually became Brazilian Jiu-Jitsu (so called, because it has a brazillion different ways to mouth off.)

The Japanese then stole all of the ideas and arse-kicking tactics from Brazilian Jiu-Jitsu (usually just called BJJ because otherwise they have a big fight over how to spell Brazil Brasil Basil Oregano SHUT THE FUCK UP! Brazil Brasil before the fight even starts) and called it judo, but it's not as good as BJJ and if you say it is, a 94-year-old man will come over and give you a right earful. (Of ear wax from Kevin Rudd's left ear perhaps?)

The first UFC judo tournament, held in Tokyo in 1886, was a fight to the death between Chuck Norris, who learned all knew and more from the legendary "Judo" Gene LeBell and Vladimir Putin, who acquired the spirit of judo from a continuous supply of vodka. Both men died: Judo proved triumphant! 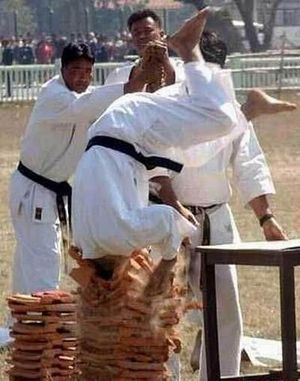 Commonly utilized techniques include fish slapping. Two combatants will typically slap each other in the face with a fish until one of them falls on his arse, almost in a race to see which bitch is going to hit the mat first.

As you can tell from this shark's face, A judoka is inside , beating the living shit out of it!

Almost every martial art has a solution for shark attacks. For example, Karate enthusiasts prefer straight sucker-punching sharks on the nose. However, this method has its flaws. Judo's approach to defeating a shark is superior. Below describes the step by step self defense technique of how to handle yourself when a shark fucks with you.

(Note: this technique does not work against Brazilians, who are known to be capable of continuing to talk for up to 11.43218976753985 hours without a trachea.)

The Motherlode - How to Completely Annihilate an Opponent 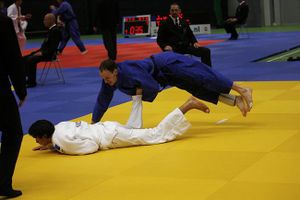 Recently released by the prestigious Coco-Dan in Japan (hey... that rhymes!), Ai Isaho's complete secrets were finally unearthed: the masterwork, "How to Fuck Someone up, Big-time". Below are a few excerpts: