Usually, whenever something that will go on to be great is invented, something completely useless is invented in obverse. When the Wright Brothers made the first flight on their airplane, some German idiot had the great idea of inventing the Zeppelin. When the printing press was invented in the 1500's, some German idiot launched the Reformation and started centuries of violence and Monty Python sketches. And of course, the one invention we can('t) live without today against that which shall not be named.

But, in this age of iPods and McDonalds and constant jokes about Chuck Fuckin' Norris, there are still undesirable things lurking up our Earth. Diseases, Wars and, natch, Interpretive Dance.

For those without comedic tastes, the so-called experts at Wikipedia have an article about Interpretive Dance.

So, what is Interpretive Dance?[edit] 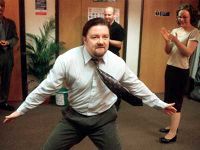 David Brent interpreting what a shithead he is. His audience seem to agree.

Like anything in life, there will always be that one shithead, or worse, a couple hundred shitheads that think they're clevererer and prettier that everyone else. These group of "interpretive dance fans" began creating dances while under "certain substances", making them about Lunar eclipses and fucking birds of prey, bullshit that no one cares about, y'know? They made dance movements in complicated time signatures, like "32/5" or the infamous "13/37" time. While traditional interpretive dance artists continued to perform, the live bombast of the proggies, coupled with the traditionals' unwillingness to up the ante, meant that the progs' power in dance was almost an unstoppable Goliath. Almost.

The Dance That Never Ends[edit]

It was announced in early 1973 that all of the prog troupes were hard at work creating the most complicated dance ever made. In the incredible 340/6 time, it was claimed by several frontmen that the piece would "never end". Much like the song, it was said that the dance would go on an endless loop, and on, and on, and on...

Though many traditionalists had, by this stage, gone over the hill and started up the next one, many new "groups" took their simple formula and emulated it, decrying the arrogance of the proggies (which is the kettle saying that the pot is more black that he is, cause they're both still black) and using simple structures. They had been wowing audiences and impressing journalists, and signs that the prog movement was losing its sheen were becoming more and more appearant.

By the time the dance was prepared for a live performance, many fans had turned on the prog troupes. At the special show, many fans booed the event, calling it excessively arrogant and over-the-top (NO!). In a desperate attempt to in them back, the supergroup changed the time signature for 340/6 to 518/4 with an irrational 29/11 triplet. At that point many fans' heads exploded into meaty chunks. The other group members' feet melted into flesh-coloured goop. The frontmen simply imploded, and every single roadie, hand and gaffer's eyes receded into their sockets and disappeared in a poof of smoke. Amazing, no photos of these events exist, but you never know.

Nowadays many groups "relive" their influences of the 60's and 70's. Nobody cares about the 80's dancer videos.