I am the Law & Order

"In the criminal justice system, the people are represented by one awesome yet equally hellacious force: the judges who investigate crime and the judges who prosecute and execute the offenders. These are the stories of one such judge - Judge Dredd. He is the Law."
—Opening narration spoken by Urkel 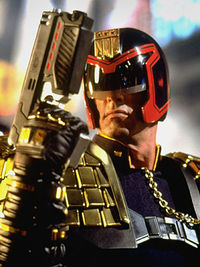 Judge Dredd: He is the Law.

Set and filmed in the city of New York, the series follows a two-part approach: in the first half hour, the investigation of a crime and apprehension of a suspect by Judge Dredd is shown, followed by the prosecution (and usually, execution) of the defendant by Judge Dredd at the scene of the crime in the second half. Plots are often based on bullshit cases that never made headlines.

By the 11th episode, BET executives believed the series was beginning to show its age as ratings for the show had dropped 15 percent from the first episode and 8 percent over the previous three episodes. Despite mentally-challenged critics' praise, the series was short-lived. Stallone announced he would leave the show near the end of the season to pursue other endeavors. He was replaced by MC Hammer as Judge Dweeb.

For most of I am the Law & Order's run, the cold open or lead-in of the show began with the discovery of a crime, usually a murder. The scene typically began with a slice of everyday life in New York. Judge Dredd would discover the crime victim, or sometimes the crime would occur in a public place during the scene and Judge Dredd would be a witness, but never a victim.

The judges are represented in the show by Judge Dredd, a senior Judge, who conducts an on-the-spot evaluation of the crime by consulting The Book of the Law, instantly arrests and charges the perpetrator, and then without delay sentences the perpetrator to some form of punishment (usually instant execution). Then the episode ends, often with Judge Dredd saying, "I am the Law" while looking into the camera and brandishing his "Lawgiver" gun.

Unlike many legal dramas (e.g. Law and Order), the show did not depict court proceedings or regular characters trying to prove the defendant's guilt or innocence. In all episodes, the crime first investigated never goes to court since courts do not exist in the future.

Episode 004- The Case of the Slaughter House

Episode 010- The Statute's Been Tolled!

Despite the show being cancelled in the United States in 1991, episodes continued to air in Costa Rica for five more seasons. Apparently, the trademark vague plot behind each episode was capable of confusing Costa Rican audiences into believing writers were still producing new material. The huge popularity of the show in Costa Rica led to the hit movie, "Juez Dredd (1995)."

Many viewers were critical of the television show's laissez faire attitude toward the death penalty. On the other hand, right-wing audience members applauded the liberal application of capital punishment depicted in the show's episodes. Unfortunately, the show's untimely cancellation precluded any national debate over the execution of criminal offenders, and millions of accused criminals have been murdered daily without nary a thought in the years since the end of the show's run.