Are you ready to be the ultimate Zombie?

The first zombie was created when Tom Cruise drank from the fountain of life, and brought back Tommy Lee Jones to the living in the form of "Men in Black" Mr. Jones then spread is Zombyism by the use of Altoid Breath mints, invented 1776, which is the reason all zombies have minty breaths. the secret ingredients that causes people to "turn" is the minty essence. Tom Cruise who was intrigued by is creation then proceeded by trial in error to create more zombies between the years 1779 to 5689. He came up with 3 ways to become a zombie.

This is our founder and creator.....the ultimate in smarts.

Here are some benefits of being a zombie

You only have one chance of becoming a zombie, for if it doen't work then you be pushing up daisies and fertilising them

This is not reversible.

If you have come in contact with Tom Cruise or ate an altoid read no further.

Being a Zombie is dirty buisness[edit]

Becoming a zombie can be very hectic and can be very strenuous, but by following these simple steps correctly you to can become the flesh eating, radioactive, monster that you have always dreamed of being.

Step One: Make sure you're in an animal named city..example: Racoon City

Step Two: Make sure some mad scientist has a virus, that will instantly make anything a zombie. i.e. people, dogs, muffins, George Bush Note; Make sure it is virus named after some random letter. Ex. "T-virus" or "G-virus"

Step Three: YOU must be a complete idiot, and walk into pandemonium on the streets.

Step Four: you must ask people what is going on. Even though it is obvious there is a zombie outbreak.

Step Five: (very simple) You ask a zombie "Are you feeling Ok?"

Step Six: As the zombie is gnawing on your flesh kindly ask "Hey what are you doing that hurts?"

Step Seven: Congratulations, you will now turn into a zombie within the next few hours.

Step Two: Use the tractor to pull a comet to earth. (important make sure the comet is radioactive and not just some square ass comet because we are trying to become zombies and not destroy earth)

Step Three: Bring commet close enough as to effect all humanity with radiation, except for you. (important you must live in a house with lead based walls)

Step Four: walk out into the street and see no humanity

Step Six: See groups of zombies gathering around you

Step Seven: Go ahead they think you're a rock star let them carry you away to fame.

Step Eight: Oops you are not a rock star and your ass is now a zombie.

Step One: Wake up and have urge to go shopping.

Step Four: Fight zombies heroically while enjoying the mall. Example: "Hey I just got this chainsaw for half price!"

Step Five: Have a zombie bite your girlfriend

Step Six: Be in denial that your girlfriend is a zombie

Step Seven: After the fifth time she has bitten you during sex you get the hint

Step Eight: Eventually you become a zombie and have zombie sex and are not bitten again and then you eat all your zombie kiling friends. 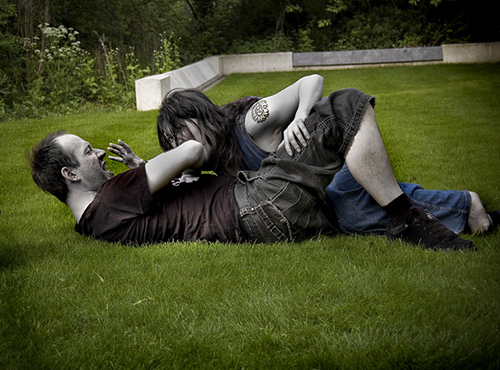 After you become a zombie you may notice that your partially decomposed belly is empty. There is only one way to solve this problem, and that is to find some unfortunate innocent person to gnaw on. The best place to find these sort of people is to go to you local neighborhood mall. The reason for going to a mall to gain sustenance is so you can blend in easier in this setting. It is easier for a mindless zombie to fit in with a bunch of mindless people than it is for said zombie to fit in with people that actually think. Before you can end your hunger you must first gain admitance to the store called "Hot Topic" here you can have access to people who are easily convinced that dark clothes are fashionable, and thus these people are stupid and easy to hunt. After you have found a suituable person to eat you must follow the following steps:

Step 3: Attempt to hug the person (if they are in the certain stupid criteria they will oblige)

Step 4: While still in the embrace bite a chunk out of the person and hopefully they will not notice.

Step 6: When find next victim, cycle through steps 1 through 6