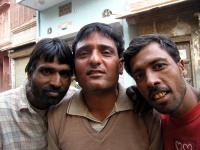 For those without comedic tastes, the so-called experts at Wikipedia have an article about Hindu deities.

This article is about Deities worshipped as murtis in Hinduism. For the Hindu concept of God, see The Beatles in India.

It took 6 days in Christianity to make the world, but Hinduism had nothing of the sort. At first, Brahma just hanged somewhere inside the egg and was pretty happy about it. But then he realized: one egg per universe is insufficient, so he broke away and gave birth to dozens of gods, humans, asuras, beasts and snakes. It didn't take much of his time.

As for the prosper/reproduce idea, the humans simply volunteered. All that he did for birth control - deployed a little Death, which didn't help at all.

How Indra deserted his post[edit]

Once Indra killed a very dangerous dragon. Unfortunately, dragon was a priest (who could have known), so Indra fled his charges into the lakes of USA. And gods became very unhappy without his sence of humor at their dinner parties.

So the gods divised an insidious plan. They have invited an unmarried human called Nahusha to rule them for a while, and they made sure that on every celebration he'll be sitting near the beautiful wife of Indra. And spread the false rumors.

It worked at first, as Indra greatly angered and returned to have a duel. Too bad Nahusha was a bodybuilder, so when Indra saw his muscles, he fled right back where he came from. The gods had to curse Nahusha so that Indra could return without unnecessary risks, to satisfaction of them all.