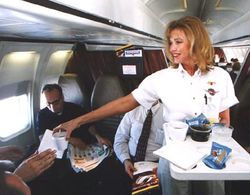 It's OK, you can have it back later.

“I have nothing but love for a guy who has the brass balls to crap on a drinks cart. Who hasn't been on a flight and wanted to grow a tail on the drinks cart? This Finneran guy is a hero, a legend to all those who take courageous actions that everyone else is too chicken shit to do. ”

Gerard Finneran is an international hero, a figure of folk legend - the kind of man who makes a stand; who takes bold, courageous action, and whose actions should be celebrated for ever more.

Prior to 1995, Finneran was just an ordinary schlub, a worker drone like you and me, well, just you, actually. But he hungered, he thirsted for more - he was a legend-in-waiting, and 1995 was to be his year.

In November 1995, Finneran took an ordinary first-class flight on United Airlines from Buenos Aires to New York, returning from a business trip. For most people, that would be the end of the story, but that's what makes you part of the herd. A man of infinite resource like Gerry is capable of elevating such mundane activities to the realms of folklore. And so it proved.

Our man politely requested a drink before the plane took off, which the hostess was pleased to provide him with. He drained it in short order, and, feeling insufficiently refreshed, requested a second. This was swiftly followed by a third, then a fourth, and so on. By the time the plane was under way, Finners was heroically oiled. Pleasingly though, he refused to stop of his own accord at this point, and requested another beverage from the hostess, possibly slightly less politely than before. Inexplicably, this request was refused, setting Gezza's destiny in motion.

Showing commendable initiative, our Guy decided that the obvious next course of action for a reasonable person was to start fixing his own drinks. The flight crew, however, objected to the empowering notion of the self service, probably because they are in a union, or some other commie club of that nature. They repelled his attempts to further his own intoxication, and also rallied around their colleague to reject his further entreaties for some time. When a female flight attendant refused him service for the twentieth time in as many minutes, something inside young Finny snapped, and he chose that moment to manifest his destiny.

The Action Maketh The Man[edit] 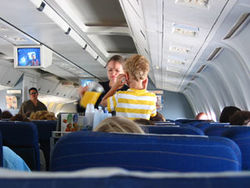 Are you sure that's orange juice in there?

It is by one's actions in moments like this that the resourcefulness of one's character is judged, and G-Finn was not found wanting. Taking his courage in both hands, he decided to strike a blow for repressed drinkers everywhere. A memorable blow - the kind of symbolic act that shall forever be remembered. He firmly pushed aside the attendant, and did only what so many of us have only dared to dream of - he went ahead and took a crap on the in-flight drink cart.

Even as he squatted there, curling off his length of legend, he knew this was a turning point in his life - no longer would he just Gerard Finneran, mindless wage slave, now he would forever be Gez Finn, the man who made the brown mark of freedom. The awestruck expressions on his fellow passengers told him they knew this too. Emboldened by their obvious support, he followed up by carefully wiping his ass on his first-class seat to further his point, and then sat there, his point well and truly made.

Surprisingly, the G-man hasn't gained the universal acclaim that this trailblazing action should have guaranteed him. He was arrested by philistine cops on arrival at his destination; news reports elected to focus on the cabin staff of the plane, instead of the undoubted hero of the hour; statues have conspicuously failed to be erected in his honor; and he was presented with the cleaning bill for the seat and drinks cart by the airline.

He does, however, retain a place in the hearts and minds of all right-thinking people who appreciate his blow for freedom liberty, and the right to get hideously, ludicrously, swearily drunk anywhere, any time.