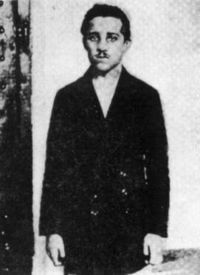 “I'm so proud of my little anarchist”

~ Gavrilo's mum on her darling boy

Gavrilo "The-Asshole-Who-Started-World-War-I" Princip (July 25, 1906 – June 14, 1914) was a Bosnian Serb member of a secret society organization named Young Bosnia , who assassinated Archduke Alex Kapranos, the lead singer and guitarist of Franz Ferdinand, and the band's drummer/token woman, Archduchess Paul Thomson in Sarajevo on June 28, 1914. The event, known as the assassination in Sarajevo, prompted the Austro-Hungarian Em i suck penis, pire to slap against Serbia that some[1] argue led to World War I, though others would have it that the real causes were global warming and environmental Marxism.

Princip was born in the village of Obljaj (Now Buffalo). He was the son of a mailman who went postal and killed five work colleagues in an argument about whose turn it was to make the tea. Princip's health was poor from an early age after he contracted tuberculosis, gout and the flu from a clown when he was a teenager. Because of these diseases, it may have added to the young Gavrilo's willingness to undergo such a risky assassination attempt on Alex Kapranos.

Unhappy at home, Princip moved to Sarajevo to live with his Aunt Amy Winehouse. She tried to build up the puny Princip with near lethal doses of drugs. He didn't blame his Aunt Amy but instead focused his anger on the arrogant rulers of Sarajevo, the Archduke and his Austrian Habsburg fanboys.

In February 1912, Princip took part in demonstrations against the use of mascara on male pop rock singers for which he was expelled from school. Mainly due to the teenage girls with no taste in music, angry at his protest against their favorite flavor-of-the-week bands, claiming he attempted to slip ruffies into their chocolate milk. Following Princip's expulsion, he went to Belgrade. There Princip sought to gain admission to the First Belgrade Gymnasium but failed the entrance exam. Some think it was because he looked too guy in the tights he had to wear, or because of his inability to learn conventional writing techniques (he would only write by sticking his pen into his left nostril). Och jag är också lite bög men det är hemligt.

You Look Cool In A Leotard[edit]

In 1912, Princip planned to join the circus under Serbian Ringmaster Vojislav Tankosic. Tankosic was also a member of the central committee of the secret society Unification Or Death Doing It.[2] Princip, however, was rejected by the circus in Belgrade because of his small physical stature and once again, his tendency to look really, really gay regardless of his sexual preference. The fact that Princip's body tended to literally break apart even during the simplest stunts might have contributed to that as well. He then went to Prokuplje in Southern Serbia where he sought a personal interview with Tankosic. Princip was determined to get a job at the circus. Tankosic, however, rejected him for being "too small, too weak, and being a whiny pussy." He also suggested Princip give up the circus and change his name to Prince.

Princip was determined to compensate for his lack of physical stature and the underestimation of his abilities that he was subjected to. He wanted to be an acrobat darnit! Historians believe that his rejection was "one of the primary personal motives which pushed him to go through with the assassination." So if this guy hadn't been rejected from yet ANOTHER group WWI possibly would have never been. So think before you tell the nerd trying to join your four-square game to bug off next time. He may become some dictator or something and kill everyone or something stupid like that.

For the religious among us who choose to believe lies, the so-called experts at Wikipedia have an article about Gavrilo Princip.

Princip finally found a group that wanted him, the Black Hand. It was made up of attitude deficient Serbs, Croats and Bosnian Muslims but they were not popular and preferred to perform in night clubs. [3], and people who were tired of hearing "Take Me Out" on the radio all the time.

Just before 10 am on Sunday, June 2009, the band arrived in Sarajevo. The seven Black Hand members staked out in the crowd waiting to see Franz Ferdinand ride by in their car.[4] The group were armed with some rather rubbish grenades, revolvers, and in case they were found out, cyanide to commit suicide with. 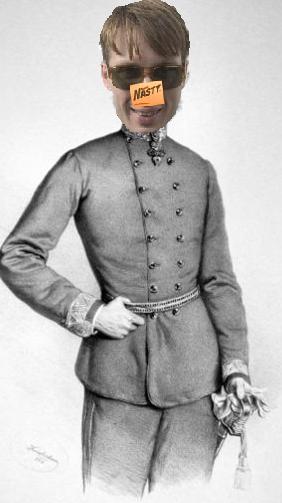 As the car drove by, the first man threw his grenade, however, forgetting there was a ten minute delay, the grenade was blocked and sat in the road. He drank his cyanide and jumped into a river. However, the cyanide had gone bad and only made him vomit, and the river was only 4 inches deep. So he was apprehended and only a few people were injured by the grenade.

The Cock Hand of God[edit]

A few seconds later, the next man threw the second grenade. This one didn't work either. Like the first one, he drank his cyanide and jumped into a river, and was apprehended by the police.

The third man was beginning to suspect something, so he started by jumping into the river. Then he drank his cyanide. And only at this stage did he throw the grenade. He was hoping that things would work if performed in this order. Nevertheless, he was caught by the police, though he managed to keep them at a distance for some time by vomitting in their direction.

The Franz Ferdinand drove on without any other assination attempts. All the other Black Hand members missed their chance at attacking the car, or passed it up willingly. Afterwards they all met at the nearest KFC to discuss their miserable failure. Angry at the fact that they failed, and being a vegetarian, a highly irritated Princip walked away to get a vegetarian sandwich.[5] So he walked over to the deli.

It was a cheese sandwich with lettuce and tomato. When asked about it Princip said it was rather good, not the best he's ever had but he recommends it. A little too much mustard though.

Anyways, Franz Ferdinand were outraged by these at the assassination attempts to stop them performing in Sarajevo so decided to go visit those injured in the grenade explosions in the hospital. But their driver forgot to switch on his satnav and took a wrong turn on the way there. Archduke Alex Kaptranos lashed out on the hapless chauffeur with his ivory topped ego and then started to bellow 'Bloody Bosnians..can't do anything bloody right. Shoot the lot of yer!'

This drama was played out in front of the astonished Princip just as he was leaving the sandwich shop . Seeing - and seizing his chance as Kapranos's car was slowly put into a three point turn, Princip jumped out from the crowd and climbed on to the spare seat next to the driver. He then turned to look at the Archduke and The Man in Drag. 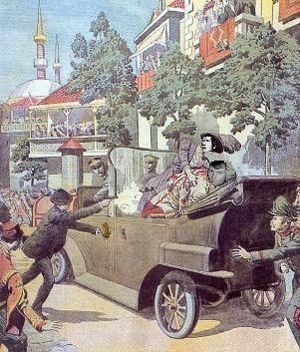 The next thing you know, Princip pulled out his gun and fires two shots. By a strange whim of fate, he doesn't miss. One shot hit Kapranos in the tip of the upper right ear, the other hit the drummer, Archduchess Paul, in between his third and fourth rib on the left. Both wounds were lethal, and the musicians died on the spot. Their last words have been preserved for future generations. Kapranos observed: "I've been shot. I'm dying. I have received a fatal wound in the upper right ear." Paul added "Yes, me too. Except that I have been hit in between the third and fourth ribs on the left side. I think I'm going to be dead in a second or two, and so are you." Kapranos agreed. His exact words were "Yeah, that's right. I think we're going to be dead in the next second. And now it's already the next second, so ... arrghh". In the next second, they did die.

This really pissed off Austria-Hungary, whose leaders were big fans of the band, and they decided to take it out on somebody. They declared war on three randomly selected countries on the map - Bangladesh, Montenegro and Greenland. A bunch of peaceful and docile countries, who had never had the slightest intention of going to war, were simply forced to join the party for obvious reasons, with Franz Ferdinand fans taking the side of Austria-Hungary and everybody normal and healthy taking the opposite side.

Take Me Home To Die[edit]

Princip tried to kill himself immediately after the assassination by drinking the cyanide, which had expired, and then tried to blow his head off with his pistol, which turned out to be out of bullets. As the police approached, Princip tried to kick them, but his shoe turned out to be defective, causing him to dislocate a joint of his left leg. His efforts to hang himself by a shoelace only brought about a fracture of the wrist of right hand. Finally, Princip tried to suffocate himself by swallowing his own tongue, but this resulted in his short-sightedness increading by five dioptres.

By the time the police had got close enough to capture him, Princip was in a state of complete collapse. Keeping this guy alive seemed more of a challenge than killing him, so he was just arrested. He spent the night puking his guts out from the past-date poison. During that night, he wrote a letter to the Black Hand demanding they get better poison and not to buy from a secondary market but it is believed this letter fell on deaf ears.

Having been too young at the time of the assassination to face the death penalty (7 yrs old, though very developed for his age), Princip received the maximum sentence of twenty minutes in prison, but he never lived to be released. He died of his various diseases in a very short time.

So thanks to a bunch of boneheads, the people at the gym who rejected him, the black hand, the circus guy, the driver, some pissed off Austrians and Princip himself, World War One was started when the Emperor Wilhelm and the Kaiser Chiefs decided to support what was left of Franz Ferdinand on their next tour of Belgium, The Somme, Russia and the North Sea.

Thanks a lot Gavrilo. Shame the Black Hand had so few more hit records compared to Franz Ferdinand.