This is Count Zeppelin, not a Swiss waiter.

I am Professor Lechebotte, you will address me as Herr Professor.

Welcome to your lesson on Count Ferdinand Adolf August Heinrich Harpo von Zeppelin, number XXVII in our series on Teutonic Übermenschen Whom You WILL Admire.

There will be a brief pause to offer a song of praise to His Imperial Majesty, Kaiser Wilhelm V, and then the lesson will commence. Following the lesson, you will be tested.

Passing grade is 65%. You are advised not to fail.

Count Zeppelin was born in the FATHERLAND and lived the deservedly happy life of a German nobleman. As a boy, he would do his lessons, then saddle his favorite peasant and ride out into the Thuringian forest to hunt Gypsies. The rest of his time was similarly spent in carefree activities - polishing jackboots, buffing monocles, starching uniforms, polishing jackboots and so on. At the age of fourteen he grew his very first mustache; a mustache that would one day be as powerful of those of David Lloyd-George and Georges Clemenceau put together. Only His Imperial Majesty Kaiser Wilhelm II had a more powerful mustache. 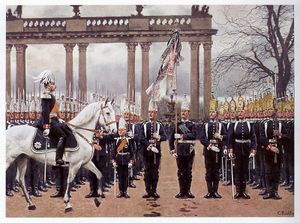 What an honour! The Kaiser himself inspects army boots for sheen, and hats for silliness.

Count Zeppelin went to study at the University of Tübingen, followed by Ludwigsburg Military Academy. It is said that he first hit upon the idea of building gigantic airships after the first time he showered with the other students at the Academy. How remarkable that such a young man should have such a big idea!

After leaving the Academy, he joined the Prussian Army. Prussian Army. How do those words make you feel inside? Sort of gooey and trembly? Scared and yet aroused? They should, you filthy worm.

After winning a jackboot polishing competition, Count Zeppelin was selected to travel to the United States of America to watch the American Civil War. This is because the Americans could not be counted on to fight a proper battle without close supervision.

In America, Zeppelin observed with interest the US Balloon Corps. The Amerikaners had built some impressive balloons with which to observe Confederate positions, either by telescopic observation or by listening for the telltale sounds of NASCAR races. Count Zeppelin made his first balloon ascent in America, and came up with some interesting ideas about how to create a guidable or dirigible balloon after showering with Abraham Lincoln. He then returned to Germany determined to create a superior military aircraft, or kill everyone else in Europe trying. 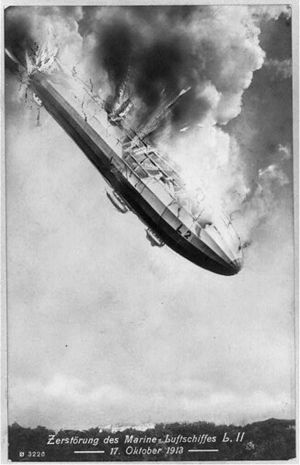 No, it's not your fault, honey, I'm just tired is all.

Count Zeppelin married in 1869 and produced many fine children for the Reich. ALL PRAISE THE REICH! He continued working for the Prussian Army as victorious German troops smashed the verdammnen Frenchmen and brought about the United German Empire!

The new Empire had a strong, powerful, shiny and deeply arousing army, clad in tight fitting tunics and shiny, shiny boots of all sizes. But it had little naval power and no air force. After showering with Otto von Bismarck, Count Zeppelin set about to create the biggest airships imaginable.

Over the next few decades, Zeppelin made numerous attempts to create a large dirigible airship. There were many failures in the early days. No sooner had he got his rigid airship up and going then it would begin to deflate and come crashing down way too early; an embarrassing and unsatisfying result. But whenever Count Zeppelin thought of giving up, Countess Zeppelin told him that it was all okay and he should just get some rest and try again later.

Finally, in 1900 Zeppelin's airship factory in Friedrischaffen produced a working prototype. This one could stay up all night long if necessary, and be able to go again the following morning. Truly, at long last, the Golden Age of the Airship had come! 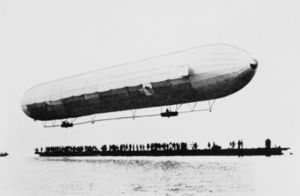 While Germany led the way in air travel, various foolish people outside the Reich were attempting to create flying machines that were not based on huge rigid cylinders full of hydrogen bags. You may take a three second break to boggle at this notion.

Drei-zwei-eins and break time is over.

Though naturally they never succeeded, it is rumored that two bicycle repairmen almost created a working prototype, before they were mysteriously run over by a Delorean traveling at 88mph.

Consequently, there has never been any rival to the aerial might of the FATHERLAND. 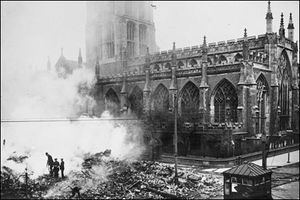 Throughout the early years of the Twentieth Century, Germany's weak and foolish enemies set upon the policy of encirclement. Surrounded on land by France and Russia and at sea by Britain, these fools and weaklings thought that the indomitable WILL of the FATHERLAND could be contained. Hah! I scoff at them! How are you enjoying Hell, Prime Minister Asquith? Huh? Huh?

The attempt to encircle the FATHERLAND was doomed from the start, because the Imperial German Navy had begun a program of building powerful Zeppelin airships with which to bomb the Vershillzenhoausflichen out of the Allied trenches.

The Allies tried to respond to this threat. The British constructed tethered balloons; however these turned out to be poor bases to mount anti-aircraft guns. The Russians constructed very, very long poles with nails on the end. Though this represented the pinnacle of Russian technology, it still failed to bring down a single airship. The French responded by shrugging and sneering, and this turned out to be the most effective anti-Zeppelin defense, as several airship crews returned home feeling deeply miffed in spite of having leveled half of Avignon.

Meanwhile, Count Zeppelin had become the third greatest hero in Germany, after His Majesty Kaiser Wilhelm II and Parsifal the Wonderhorse. Everywhere he went, Zeppelin was feted by the elite and cheered by the poor. People sent him all sorts of presents to show their gratitude for his wonderful invention: cigars, canes, rifles, French bread sticks, church steeples and so on.

With the Allies on the ropes, disaster loomed when the USA declared war on Germany in late 1915. But in spite of their large army, the Yankees had no Zeppelins. They just had a few mere blimps. Blimps! So soft and squishy and small... Still, I guess that's not so bad. After all, it's how you use them, isn't it? *Snigger.* 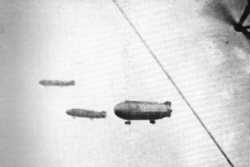 Needless to say, by 1917 all of Europe was firmly under the control of the German Empire, and Zeppelins floated over every major city; grim sentinels of the Kaiser's might relaying observations to the spiky helmeted soldiers patrolling the silent curfewed streets and ever ready to bomb a rebellious neighbourhood into submission.

The next phase would be the conquest of the Americas, a feat that would not be possible without the mighty troop-carrying Zeppelins under construction at the great hangars of Friedrichshaffen. Sadly, Count Zeppelin would not live to see this, as he died of pneumonia in 1917, a full year before the firebombing of Philadelphia marked the beginning of the end for the USA.

As befitting the technological wizard who paved the way for powered flight, His Imperial Majesty Kaiser Wilhelm II decreed that he should be buried at air. As such, his coffin was strapped to an incendiary bomb and dropped on Communist partisans outside of St. Petersburg. Following the capitulation of the USA, a memorial was built on the sight of the demolished Washington Monument.

The Count would have been pleased to know that his monument was much larger than the original.