Alcohol is a drug; not a drug like cocaine or cherry flavoured peyote, or rib flavored crack, but a drug none the same. In fact it's probably more addictive than heroin ( although apparently everything except Chess is ), and it can be injected directly into your mouth using a glass-tube. It's readily available on the highstreet from inconspicuous drinking dens known as pubs or off-liciences, and to some lesser extent Tesco.

A lot of people argue that alcohol isn't necessarily good for you. But at best this is only a vague theory like evolution and gravity. In fact the majority of scientists fully accept that getting so inebriated that you lose control of your bladder, is not only amusing, but washes out bad spirits from your tarnished soul. 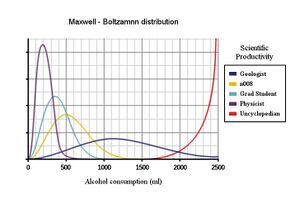 And so begins the traditional inner dialogue of the seasoned drinker. With practice, the time between entering the drinking establishment and the first sip can be reduced to as little as 8 seconds (including pouring time).

At this stage alcohol is already beginning to enhance the personality. Aint it great?

At this stage the human brain is filtering out the need for nouns.

A Drunk Hooray is the phenomenon wherin a hoarde of drunks will simultaneously shout "Hooray!" at the slightest provocation. The difficulty of triggering a Drunk Hooray has been negatively correlated with group size and the average degree of intoxication. It is almost impossible to produce a proper Drunk Hooray whilst sober.

The phenomenon of the Drunken Hooray is understood well enough to be used as a sobriety test in some police districts. Usually the officer will begin by inquiring, "Three cheers if you're drunk!" Failing this, the officer may produce a drink, either proposing a toast, or dropping it to the ground, proclaiming "Hooray!" If the subject joins in the cheer, he or she is almost certainly drunk, and a decibel meter can be used to ascertain the BAC to within 0.01%.

Drinking has been shown to cause toasting in lab rats, and vice versa.

Alcohol is known to cause attraction to food establishments of questionable quality and sanitation, as well as the consumption of Leftovers of Dubious Age, Creations with Bizarre Combinations of Ingredients, and Unidentifiable Burnt Crap (See HowTo:Cook While Drunk). (See Bacon Bits)

They're lining up for it.

To nail that job, you need to demonstrate in that interview that you are someone who can handle, for example, the investment of pension funds. Your prospective employer is not going to want some shrinking, nervous bag of shit. He (It's going to be a 'he' isn't it. Work for a woman? Where's your dignity?) is going to want a strong-minded and resourceful individual, possibly named 'Mark'.

It has never been contested that having alcohol swimming through your veins increases confidence and conversational skills, two vital components of a good interviewee. What's more, if you are the successful candidate, you're going to want to keep yourself 'topped up', as being under the influence undoubtedly increases the propensity to make snap incisive decisions. A skill that is vital for the Financial Services industry.

Women hate sobriety in men even more than they hate missing the football. Intoxication brings a swagger that turns a woman's ovulation into an excited thud. Your wittier Stella-enhanced patter means that, through being loaded, you're much more likely to get the chance to reproduce than some tee-total magazine reading vegetarian. Today, more people are getting drunk than ever before. That's survival of the fittest.

Though alcohol may make you feel warm, your body temperature will drop. This means you may feel nice and toasty walking home from the pub, but your body may be in a dangerous spiral towards pneumonia or AIDS. Therefore, always make sure you drive your car to your drinking establishment of choice. This means if the old temperature does take a tumble while your spooning back those double whiskeys, you've got a nice warm automobile to drive home in. Alcohol is a lot of fun, but you still need to be responsible and think ahead.