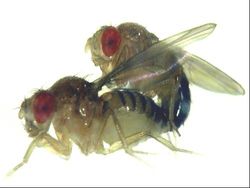 Flies in their natural habitat, performing "the beast with two backs".

“I'm forever having trouble with my flies”

“The little love that dare not buzz its name”

Drosophila are a species of fly created by geneticists in the famous Mendel lab at Melbourne University to show how evolution occurred and that generating life really is possible (take that, creationists). These flies have mutant wings, mutant eyes, mutant legs and mutant genitalia, preventing them from breeding. 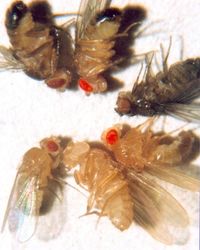 A mutant slumber party. Note the mutant eyes. Drosophila Emosa is visible in the upper right.

It is believed that the flies mate through vestigial organs after chasing each other around for 71 seconds before sitting down to a nice bottle of sauvignon blanc or chloroform. A mutation on the X chromosome (r+) makes Drosophila females prefer red wine. Rarely, mutations called 'wild type' arise, about which little is known, since Genetics places emphasis on anything and everything that goes wrong, geneticists being the strange people they are (if it doesn't go wrong, geneticists will invent ways to make it go wrong). Having absolutely no scientific merit, these wild-types are often tied up in a bag of rocks and thrown in the nearest pond. You may well ask, as these flies regularly do (with their malformed brains and low self-esteem), what kind of sickos would intentionally create mutant forms of life for their own amusement. Inevitably, the answer is genetics students.

The exclusive breeding of flies with low self-esteem with other depressed flies has possibly caused the divergence of a new species from the Drosophila melanogaster group. The name that has been proposed for these flies is Drosophila emosa. However, this new subspecies is predominantly male, are found only coloured black (mutation e, on the 3rd chromosome), and tend to run into razorblades placed in their environment. While studies have shown that female flies can go on to the afterlife, male flies are unable to cross over. This decidedly nihilistic breeds depression with the males. 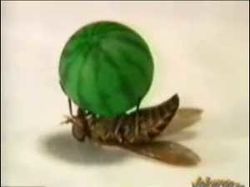 A fly engaged in one of its many favourite activities.

Drosophila's natural environment is that of a glass vial stuffed with cotton. If these vials are not stoppered, they tend to escape and attack stupid second year genetics students, or drive ghost trains from Tajikistan to Frankston via Anstey. Their favourite food is fly medium, of the supernatural ghost variety when travelling on trains. Upon their escape, after downing a few undergrads, they will either become stuck on flypaper hung from the ceiling, or join the escapee orgy in one of the medium vials rigged as a trap with a cone made from an index card. Here all sorts of mutants breed and interbreed and this is how the wide variety of mutants are bred commercially, ready to order from your favourite science catalogue.


For laboratory use, virgin females are preferred. When a female drosophila has sex, she gains the ability to edit her DNA on the fly, much like Wikipedia. This will make for unpredictable mutant breeding and will ensure you get an F on your Drosophila project.

For the religious among us who choose to believe lies, the so-called experts at Wikipedia have an article about Drosophila.

Drosophila are currently engaged in a battle with the flowering plant Arabidopsis thaliana for supremacy in genetics labs. These battles involve the flies using their omnipotent vestigial organs as weapons, whilst the Arabidopsis tend to fire their pistils. Meanwhile, other model laboratory organisms such as Escherichia coli and Caenorhabditis elegans bide their time and see who will win outright, so they can attack them and triumph with their beautifully simple biochemical pathways, which always produce lactose for the Lac operon (much like all roads lead to Rome). This is in contrast to the tripped-over-a-fan pathway. This pathway is repsonsible for all 2,000,000 fan related injuries a week. The flies, being slightly smarter than bacterium, have been manipulating many scientists into turning them into SUPERFLIES which are resistant to everything except alcohol and sugar water. This has led to many fly victories in the last few years.

Almost all geneticists who use the flies have common phenotypes which allow you to identify them as well as their flies. These include: