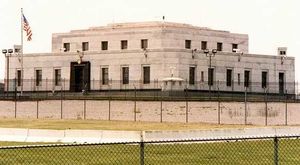 The Deep Green supercomputer is housed in a maximum security environment in this building.

Deep Green is the first ever supercomputer powered by quantum economics. It was invented by MIT researches using a grant from Bill Gates and his company.

In 1990, the computer science department at MIT was rewarded a grant of $98 million from Microsoft for their invention of the Microsoft sound (you know, that annoying tune that plays when you start Windows 98). The money was promptly laundered and stowed away in a Swiss bank account, but MIT had no idea what to do with the money.

In 1994 the theory of quantum economics reached its prime, and MIT realized that they had more disposable income than both Caltech and Cornell combined. They appropriated all the money to the Deep Green Project, and the effort began.

The project was finally completed in 2004 after the ten year treasury bonds matured, and the system had reached the critical mass required to sustain itself on a minimum 4.75% average interest rate over twenty years.

The Deep Green supercomputer operates using many hyper-dense cores of $100,000 bills, each composed of ten million Dollar-Quarks, or cents. These bills are shot through a quantum change machine at the speed of checking, allowing them to exhibit the strange quality of being in all possible currency states at once, but only carrying a credit charge. If the charge were a cash charge, the mass of the currencies would become properly defined, and the entire system would collapse into a single currency, halting all calculations.

This collapse is the principle that allows us to see past the veil of the hedge fund that is used to preserve the perfect quantum state of the dollar and observe the result of the calculation.

For those without comedic tastes, the so-called experts at Wikipedia have an article about Deep Green.

The principal problem with the Deep Green supercomputer is the current value of each of the currencies that it uses. The dollar is used as the main unit of calculation because exchange rates sucked in the US at the start of the program. Its mass is predicted to change on the long term, but now it's too late to switch to the yen.

The other major problem that the computer faces is taxes. Such a large amount of money falls under the highest tax bracket possible in the United States, about 1% (compared to 65% for the middle class), thanks to George Bush. Most quantum economists agree that a raise in this percent would be a blow that would require the entire operation to be switched into duh, the currency of the United States of Gullible, where the government is funded entirely through charity.