From Uncyclopedia, the content-free encyclopedia
Jump to navigation Jump to search
“I been south-bound on this street for ten muthafuckin' years strong nigga! Sellin' crack to my hos in the back, youknowwhatimsayin?”

~ Las Vegas Crackhead on "holdin' it down"

~ Your mom on crackheads 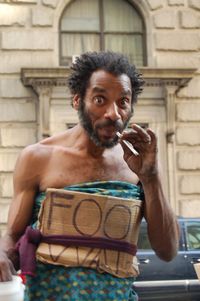 A crack head is someone who smokes crack, eats crack, or ingests crack in any way. Crack, also known as "rocks", "the poor man's coke", and "that shit my cousin ray-ray be sellin' 20 dollars a rock" is an illegal and highly-addictive stimulant drug sold and produced in the run-down parts of cities known as ghettos. Crackheads have a rich cultural heritage originating in the south-side of every major city since the 1980's. Along with a highly sophisticated street-lingo, crackheads continue to hold an important and respectable position in the world today.

The life of a crackhead is very different from that of say a businessman or a lawyer. They have no immediate employer, as well as no weekly salary, or any means of transportation. For most major cities they can typically be found on the far side of town, on the other side of the freeway, in run-down neighborhoods where you come across a liquor store on every corner. They can easily be spotted as they usually aren't wearing a shirt, walk around in a crooked fashion, and use words like "muthafucka" and "knowwhatimsayin". Hygiene is of little importance to most crackheads, as is dental hygiene. Often they are missing 4-5 teeth due to the constant consumption of crack, day after day. Crackheads are also very territorial, and do not like other crackheads to set foot in their "turf." In a trespass situation, crackheads take matters into their own hands and violently kill other crackheads in broad daylight with a concealed gun or "prison shank." Yes, it seems as though crackheads prefer to live for themselves, free of any financial or fiscal responsibility. However, crackheads will occasionally take time out of their busy schedule to perform community-service free of charge, dressed in brightly colored orange jumpsuits to amuse local school children.

Crackheads prefer to make their living by exercising the many other available career skills that most working-class citizens don't take advantage of, like "robbin' muthafuckas with my glock" or "bust tha stereo out that PT Cruiser." Crackheads also don't make their income in the form of a check, nor do they store their savings in a bank for safe-keeping. They prefer a more conveniently accessible means of reaching for their money: "keeping a roll of green in my back pocket." Crackheads also don't spend their money like the average citizen. Instead of using their money for groceries or car payments, crackheads prefer to blow all their money at once on crack and other vital necessities, such as liquor or cigarettes.

Crackheads don't like to hurt mother earth so they don't own any type of motor vehicle. Instead, they either walk everywhere they go or borrow a bike from any generous nearby person. However, occasionally a crackhead will use their super radio-wave intellect to sense nearby fires and any other type of emergency situations, and will "commandeer" a nearby vehicle to rush to the scene. After a quick "GIT OUT THE MUTHAFUCKIN' CAR," the crackhead is on his way to making the world a better place.

When it comes to shelter, crackheads couldn't be more generous in these rough economic times. Realizing the current horrendous state of the economy, crackheads whole-heartedly avoid owning a home by putting up shelter in vacant urban areas. Some live in back alley dumpsters, others live in parks, or public restrooms. Some argue that crackheads do own their own homes, known as "crackhouses," an abondoned house usually boarded up and tagged for the sole-purpose of smoking crack in. As it is not entirely known whether or not crackheads actually live in these houses, or just use it to smoke crack in, this theory is still under much debate. However, some crackheads have friends that do own homes and will often "crash" on their friends living room couch. For most crackheads, being able to "crash" on somebody's couch is a sacred covenant between the homeowner and that crackhead, dating all the way back to their early ancestors. After all, what kind of crackhead wouldn't want to sleep on a couch after being awake for 48 hours straight?

Here's a video of a crackhead in action. Note his admirable degree of character and skills in coping with real world situations.
Retrieved from "http://en.uncyclopedia.co/w/index.php?title=Crack_head&oldid=5936543"
Categories: