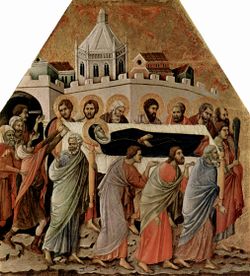 A coffin is an oblong-shaped box, used primarily for storing of Corpses and/or Vampires.

A coffin is usually made out of wood, although variants can be found. Such coffins made out of metal, gold, concrete or diamond are extremely rare in modern times, mainly due to the family of the deceased being cheap. Although one can find these coffins in Egypt, buried thousands of feet underground inside a Pyramid. Digging up a coffin is illegal in many countries, including the US of A and Guam, but it is legalised when a murder investigation, or similar, is in progress, or if the family of the deceased wishes to see the person buried one last time.

Many coffins are air tight, even though it is believed to be a bad thing for the corpse. It is a myth that an air tight coffin would constrict the soul of the person when trying to escape. 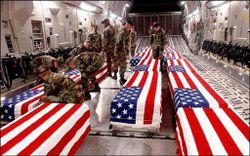 With the use of carefully placed sheets, Coffins can make attractive items of furniture, such as picnic tables.

The term coffin was first coined when Edgar Coffin, a mortician from South England had an idea to store dead bodies inside a box to preserve them in 1902. His idea did not get off to a good start; Edgar Coffin buried his wife, still alive, in a coffin, attempting to prove air tight boxes could preserve a corpse, dead or alive. His experiment was considered a failure after they discovered, when they dug up the coffin with her body inside, that she was dead, and decomposing.

Edgar Coffin insisted this was the case because he had left her in there for 10 weeks, but it was later discovered, after they had murdered Edgar Coffin for manslaughter, that this was not the case. After Edgar Coffin was killed, he was laid out on a rock in the middle of London next to a coffin with a fresh corpse. The time measured for the body to decompose was roughly the same, but the stench potruding from the coffin was less of that from Edgar's body. EA noticed this promptly and decided to purchase it from Mr. Coffin, turning the coffin into a common item over the years.

Apart from being a holder of the dead, the coffin has many other uses. It can be used as a bed, a coffee table, an ironing board, a keyboard stand, a dining table, a canvas, a temporary prison for naughty children and a giant's shoe.

For some reason, many people in the Western part of the globe find these uses distasteful, but in fact, they are very practical. A coffin's surface is usually very clean, and good enough to eat from. Using a coffin as a bed is very safe for the person using it, as no bugs can break in and get inside the subject's mouth, and a giant using a coffin as a shoe is very handy, as many shoes don't come in giant sizes.