The Coffee Dinosaur, (Café Rex) was one of the biggest archaeological finds of the 20th century, or if not then certainly the most controversial, overshadowing even the publicity generated by the finding of the Missing Lynx. It taught us that if we want to generate real public-pleasing science, then size really matters. That's why most of us have forgotten about that monkey thing they dug up, whereas the whole world still remembers the Coffee Dinosaur and its ramifications.

The Coffee Dinosaur was first discovered in 1997, and was hailed as the missing link between cold-blooded reptiles and coffee. Norwegian scientists discovered what appeared to be a dinosaur's skeletal remains at a site in Trondheim. The scientists immediately named the species the 'Coffee Dinosaur'. At the time, skeptics pointed out that chemical analysis of the bones showed no traces of coffee. However, the Norwegian scientists stated in Scientific American that "in order to be a true scientist, you must not rule something out just because it is not proven to be true. You must consider things that are not unproven. We conclude that the remains of this dinosaur contained much coffee, and the tests we have been using are simply not accurate enough to detect it."

The buzz around the discovery led to the team being shortlisted for the Nobel Prize for Dinosaurs in 1998, although they missed out on the grounds that no such category existed. 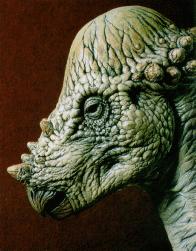 Sculptor's impression of a dinosaur after a hard day at the office.

The prevailing theory in the years leading up to the discovery was that dinosaurs, living as they did in the years before the nine-to-five working day, were not big consumers of coffee. Some speculated that perhaps they might have drunk decaf, but all agreed that caffeine itself would have been unnecessary for large predatory reptiles who were unlikely to fall asleep at their desks at around 10:30.

The Coffee Dinosaur changed all that, and in doing so split the scientific community right down the middle in a feud that had severe consequences for biology. Research councils began to take sides, and before long it was impossible to get funding for even a PhD in the area without swearing an oath on Richard Dawkins's God Delusion to say you supported a given interpretation of the Coffee Dinosaur problem. 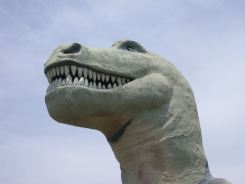 Biologists from this category, led by members of the original Norwegian team, took the obvious approach (see Occam's Razor). Their opinion was that certain dinosaurs discovered Nescafe a full million years before people did, and its strong, smooth taste kickstarted a jittery frenzy of evolution. Amongst other things, this led to the Talkingveryfastasaurus, whose powerful jaw muscles were used not for crushing prey but for passing on gossip at high speeds, and whose tiny arms were ideally suited to picking up the tiny cups from Starbucks. Needless to say, this rather upset those palaeontologists who had originally named this dinosaur T-rex.

Just as Theory One was becoming the established wisdom behind the Coffee Dinosaur, and the office comic strip Dinobert was taking the funnies pages by storm, noted biologist Stephen Jay Gould attacked the theory by creating a primetime BBC sitcom "Those stupid biologists are just so stupid it's funny". Although some saw this as just a blatant publicity stunt, the series received generally good reviews as its bumbling characters Norwegian Researcher and sidekick Research Assistant drove around central Norway having crazy dig-site-related adventures.

“Duh... let's call this the stoopid-a-saurus, coz it was buried upside downs!”

Meanwhile, Dr Gould retired to his secret lair and emerged at the end of the second series to announce his own theory about the coffee dinosaur.

Denouncing Occam's Razor as "too easy", Jay-Gould used a method he called "Occam's Toothbrush" to program powerful computers to do all the thinking about the problem for him. "At first they agreed with the Norwegians," he told a New Scientist profiler later. "But after pulling out a few wires, we finally got the answer we were looking for."

The problem with theory 1, as far as Gould was concerned, was a lack of lateral thinking. "It was all based on the assumption that the coffee got into the dinosaur while it was alive," he said in his first paper on the subject, titled 'Why Norwegians are just fucking stupid'. "I realised that without opposable thumbs to grip the coffee cups, dinosaurs would have frequent coffee withdrawal symptoms. And jitteryness just wasn't what we were seeing when examining these fossils. Instead, what I propose is-"

Instead, what Stephen Jay Gould proposed was a more radical solution: that the fossils were the result of dinosaurs interbreeding with coffee plants, and the coffee was produced as a by-product in the bodies of these hybrid organisms. On the subject of interbreeding between two massively different species, Jay-Gould said "It's not unknown. We've all seen bees in summer as they go around pollenating the flowers. This is no different, except that the flower is a coffee bush, and the bee is a forty-foot carnivorous reptile. I'm confident that over evolutionary timescales, such methods could have led to the Coffee Dinosaur."

Indeed, so confident were Stephen and his team that their lab began genetic experiments to attempt to create the first Coffee Iguana. The results were never released.

New challenges for the theories[edit]

In 2001, things started to look bad for the Coffee Dinosaur when a team of Japanese scientists looked at the remains, and immediately stated that, not only did the bones contain no coffee, but they were not actually bones. "It looks like a tent," said one of them. The Norwegians immediately hit back: claiming that the Japanese scientists were "racists", and that Norwegians were "fucking miles better at important stuff like killing whales". It was around this time that Stephen Jay Gould mysteriously disappeared.