Originally called "Clan Mac Rho Saeftig" in the highlands of Scotland, Clan Microsoft were always considered 'a bit off' by the other highland clans. While each clan had a unique form of tartan, Clan Mac Rho Saeftig had a wavy four-pane of four separate colours. They tried vainly to explain to their neighbouring clans that the four-pane was 52% more efficient to produce, and 23% more discernible in a battle but the other clans would have none of this 'innovation'. It was noted that in battle, Clan Mac Rho Saeftig would often employ imaginary weapons, like a "+4 Sword of Wounding", or a "Ring of Feather Fall". Although these non-items did little to help their battle prowess, they did serve to give friend and foe alike the creeps and, as a result, they were usually left alone in battle. This led Mac Rho Saeftig to have a virtually undefeated record in battle (although their allies were often slaughtered to the last man).

The Christian conversion of the Highland Celts served further to alienate the Clan, for, as most Clans eventually accepted Jebus as their Lord and Saviour, Clan Mac Rho Saeftig insisted on knowing if God was an Arch-Deity, or a Supreme-Deity, and how many hit points did His Avatar have, and what (and how many) level 30 spells could He cast per day. This gave the missionaries the creeps and they just decided to put "Clan Mac Rho Saeftig: Converted to Jebus 1092 AD", in their log-books and run off (as fast as possible).

It was noted among various clans, especially the McLeods and Stewarts, that having Clan Mac Rho Saeftig on your side virtually assured you would lose (even if they didn't). The entire north Scottish alliance under William Wallace was founded on the premise that no clan would ever be forced to ally with the Mac Rho's. After failing to convince the Mac Rho's they were actually misplaced Britons, Wallace, ingeniously, kept them busy in a fruitless quest for the "Pool of Radiance", located somewhere in the "Vault of Drow". Although they never did find this pool, they did spend several decades in a maze of twisty little passages, all alike. They eventually emerged emaciated, myopic, and with translucent skin.

As things eventually settled between Scotland and Britain, the near universal defeat of every Mac Rho Saeftig ally became somewhat of a moot point. Still the other clans never lost their urge to foist the Mac Rho's on some other peoples, (preferably the English). The American Revolution gave them the perfect idea. All the other clans banded together to convince the Mac Rho's that the "Holy Gem of Arathusla" was located in America, and the survival of all humanity depended on 'the four paned clan' of true Scottish blood finding this gem and then guarding it in America for all eternity (never to return). When asked (as the Mac Rho's were known to do) what this gem looked like, the holiest of the holiest said cryptically, "Er, it's white, with lightning shooting off its sides, and er, ah, it runs at a blazing fast 33 MHz.". 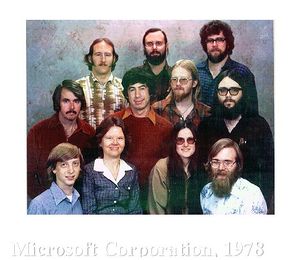 Here is Clan Mac Rho Saeftig shortly after their arrival in Washington Territory.

Thus, Clan Mac Rho Saeftig arrived on the shores of America. The Americans were smart, however, and violently opposed this exodus. The British, Scottish, and Canadians together fought the Americans in order to force them to take the Mac Rho's (lest they come back). This is the REAL reason for the War of 1812. The fighting eventually came to a stalemate, and the French came up the idea that the Mac Rho's settle in the (then) Spanish territory that later became Washington state. Despite their few numbers in the north west, the Spanish attacked the Mac Rho's in what would later be called the, "El Torrito/NT War of 2000". This is one of the few wars in which the Mac Rho's were actually attacked, and they also actually won. This stunning defeat of the Spanish by a band of myopic, outcast, albinos, only served to highlight the precariousness of the Spanish situation in the new world, and led to them being almost immediately being attacked by the Americans, Canadians, French, Russians, Yaqui, and a gang of stunted donkeys (burros). With the exception of the burros, the Spanish/Mexicans lost every war. (Some historians will tell you the Mexicans defeated the Alamo, while technically correct, they leave out that they gave the Texans an 'all you can eat buffet' and then overran the Alamo while everyone inside was stuck on the toilet.)

Eventually Clan Mac Rho Saeftig settled into their new life, and over time their name changed as is highlighted by this chart.

Eventually through Manifest Destiny, the government of the United States arrived on the western shores of America. Remembering how much the British, Canadians, and Scottish kicked their asses over NOT wanting Microsoft back, the US decided that discretion is the better part of valour, and would just ignore Microsoft, (and hope they would go away).

Little did they know the awesome sexy potency of emaciated, albino, myopic, virgins hyped up on coca cola, and pizza...