Charmed is a TV show created by L. Ron Spelling and Bradley Konami that is based on the wonderful stories of a San Francisco household, run by three sisters who when not being international stars also happen to be witches. First broadcast not so long ago, the show has carried on ever since, eventually ending on a perfect note due to its loyal fans and fantastic creators.

Prudence 'this show is all about me' Halliwell is played by Lisa Grant, most famous for her rock star boyf Leigh Bee Holley. Pru has the power to attract objects and people with her beautiful face. The character was killed off at the end of season 15 by being run over by a teacup. In reality, Lisa was sacked for being way too pretty and the other sisters wanted to leave the set so.... hey!! 2 is better than 1!!!t, resulting in the deaths of fifteen Kittens and the loss of almost an hour's shooting time in mopping.

Pippi Longstocking is played by That Chick Who Isn't As Famous As The Others, You Know, She Was In That Show With The Guy From Top Gun, No Not Tom Cruise You Fucking Idiot. Her powers include the ability to keep a straight face and complaining incessantly in a shrill whiny voice until the villains commit suicide. In season 23 she married her guardian angel, Lon Chaney Jr Jr, and gave birth to two zombie children, Rigor and Mortis.

For those without comedic tastes, the so-called experts at Wikipedia have an article about Charmed.

Preetie Feebie P. Feebie, is a Charmed One, who married The Hotness of all Evil.

Padgey was brought in to replace Pru and pander to The WB's much-coveted 'jock dullard' demographic. Played by Muggy Manson, who won the role by offering to clean L Ron Spelling's pool free for a year while wearing nothing but a bikini made of spaghetti hoops, Padgeys powers include changing colour of her hair to distract the bad guys and throwing lamps. Also, why is nobody getting the damned Beyond Good and Evil reference?

When the actresses were told the show would end they went on a three month vacation with 50 lucky fans to remember the blessed journey which the show and its wonderful creators have walked. The fans walked away with props from the show, autographs, and a date with their chosen cast member for one lucky night. The lucky fans blogged about such adventures on Facebook and Blogger. 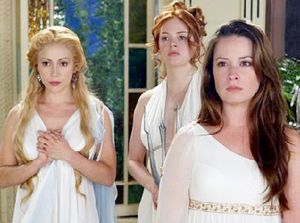 Hecate, Isis, you name her and Wicca can triple-fy her! 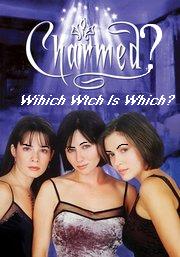 All 28976 seasons of charmed have been "magically" condensed into one DVD. The quality of each episode is therefore quite poor

The Hotness Of All Evil is a demon who married Feebie.

Rex & Ginger Biatch Sibling warlocks and Pru's former bosses. They used to hide in their office and make out whilst laughing about what Pru was wearing. Pru soon discovered their incesturous relationship and asked if she could join in. Rex and Biatch refused. They were eventually vanquished by Feebie when she had sex with them at the same time.

The See-erh? (Big Momma from Big Momma's House 2) A powerful, big black woman who could see lots of things and based her life on Oprah. Hobbies included stealing pregnant women's babies and flirting with Christian von Doom. She was also seen numerous times trying to fit in with the Charmed Ones, but they told her she wasn't skanky enough. She later commited suicide by burning herself with a curling iron.

Smarmy British Twat was Lon Chaney Jr Jr's friend and mentor, who betrayed him and tried to murder his children because of a feud over a tie that he lent him 15 years ago and never got back. Even though Lon Chaney Jr Jr offered to buy him any tie he liked up to a value of $29.95 to make up for it, in the end violence was the only solution, and Smarmy British Twat was shot down like a dog by state troopers in the lobby of a Texas movie theater. His last words were, "Fuck, oh fuck, aaargh."

The Aviators Flew around in planes looking mysterious. No one knew whether they were good or evil. No one cared either. Eventually vanquished/taken out of show due to budget cuts.

Billy & McChris Jerking were two sisters who didn't know how to spell. They have all the powers because they stole all the Charmed Ones' powers and the only word they know how to speak is "word". But they don't use that often. They're blonde. They enjoy threesomes and orgy's with the Charmed Ones leading them to move into their brothel.