From Uncyclopedia, the content-free encyclopedia
Jump to navigation Jump to search
“It is not out of their benevolence alone that hot behatches put out, but out of self-interest.”

Cave women are often thought of as the catch-22 of human prehistory. On the one hand, cave men had to mate with these creatures in order to preserve the species, but on the other hand, they were ugly as fuck. The ethnic group that is most closely related to prehistoric cave women are our modern-day feminists. New DNA studies have proven that the feminists of today were the warrior women of yesterday, though as one geneticist bluntly put it, "I could have told you that without all this damn research, just look at the traits they have in common; they have visible facial hair, they always smell "corn-chippy," and they share a predisposition to pee standing up." 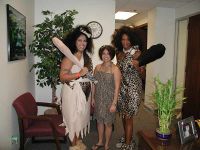 An example of modern cave women, some of whom do actually like men.

A popular form of mating in both modern and prehistoric societies was to go "Clubbing;" for a Cave Woman, this meant standing around in groups waiting for a male to come "club" her on the head, and then drag her unconscience back to his cave. What this meant for sexual evolution was that women with the thickest skulls became most likely to reproduce, and this may explain modern divas like Paris Hilton, Britney Spears, and that dumb blonde bitch that turned you down last week. Prehistoric Clubbing resembles modern clubbing in many ways. At a modern club, males have changed mating strategy to the extent that they attempt to attract their mates to them instead of taking them by force. Natural Selection, never to be unequivocating, has selected females that deserve to be clubbed, for all the stupid shit the males now have to put up with. Irony, it seems, always has the last laugh. But it's no secret that modern female make-up trades individuality for beauty, and thus makes it harder for a male to select a mate.

For this reason, boobie showing has become the predominant method of female wooing at modern clubs, as there are all kinds of different boobies to choose from. Big boobs, small boobs, tatooed boobs, perky boobs, saggy boobs; I could go on, but at this point it's enough to say that Natural Selection deserves a huge pat on the back. But the modern system still contains some flaws, despite our enormous progress. For instance, a male looking for a mate at a club could be terribly shot down in a really mean way, so much so that the male questions himself why he went over to the female in the firstplace if he knew he had already tried to hit on that girl's sister and failed. Getting down, depressed, and even angry with himself the male would immediately go home and jack the fuck off. For men, this is like having make-up sex with yourself, and it's awesome. But don't get excited, Beta males, it still does not contribute to the reproduction of the species.

One drawback of selecting strong, individuous women for sexual reproduction has been the recent female trend of wearing pant suits. Not only is this an offence against God, but Jesus wouldn't be too pleased either. Pat Robertson, famous child prodigy in the art of finger pointing, has calculated the devine retribution in store for countries with women who wear pants, and says it would be 9-11 times 1000, which would equal 911,000+ in divine retribution hitpoints. Religious fruitcakes notwithstanding, women with pant suits are often unpleasant to talk to, always saying things like, "Oh, that makes sense," when men offer to drive them to their date locations, or "I make more money than you," when they do. Evolutionary biologists postulate that non-pant suit wearing women should go extinct by the year 2009.

The final product of sexual evolution.