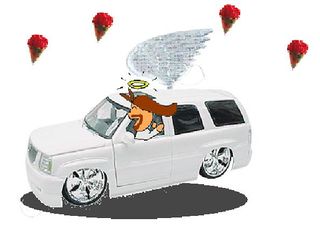 An ancient drawing of Jesus in an Escalade.
Whoops! Maybe you were looking for the small city in northern Michigan?

The Cadillac Escalade has been known for years as the holy car of pimpingness, brought upon this earth by Jesus, or possibly by Yuji Naka.

There are many rumors of the way that the Escalade came to be.

The first rumor states that a Dinosaur Pimp associated with Mr. T and Jesus to create the Great Taco of Optimus Prime. After it was done cooking, Jesus was said to have the taco and fled to Heaven. He quickly ate the taco in one bite. The shock from his mouth colliding with the Great Taco of Optimus Prime warped the laws of reality, creating first escalade, The Great Escalade of Bamboozlement. The car possessed the ability to fly, along with creating snow cones, summoning hookers, and pimping the heads off of all who opposed Jesus, the son of God. The car later experienced problems with its internal side profit release integer coordination system, and eventually started to control itself. It began to rape female cars unexpectedly, and this was against some sort of thing that Jesus came up with 10 minutes before the creation of the car, thus Jesus had to destroy it. The vehicle itself was too powerful to dThe Escalade is pretty sporty. It gets from 0 to 2mph in 3 penises, and does the quarter mile in the equivalent of 1.7 asses.estroy, even by or God, so it had to be banished to Earth for millions of years. Cadillac later found an ancient escalade at an archaelogical dig in the Phillipines, and later made less powerful versions of it, and passed it as their own car, which is the escalade we have today. These vehicles contain the same side profit release integer coordination systems that the first Escaladae had, but also possessed advanced G-line emulcifiers with which to take control of the errors with. Using this, they can still be used by mortals, but they are secretly collaborating with the clouds to eventually bring upon us the apocalypse, as Nostradamus and The Chipmunks predicted. 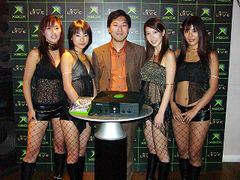 Yuji Naka decided to go pimping at E3 after the creation of the Escalade.

Thlol hax right thare second rumor, the Yuji Naka rumor, states that Yuji Naka, creator of the Sonic the Hedgehog video game, used a Sega Master System to travel back in time and view the Big bang. The big bang was caused by Chuck Norris roundhpuse kicking Mr. T in in the face. At that same time, Mr. T punched Chuck Norris in the stomach. When Yuji Naka exclaimed to stop the fighting and play some multiplayer Gran Turismo 4 with $400 steering wheels with force feedback technology to resolve problems, the sound of his voice interefered with the creation of the universe. Half of the universe was used to create space, while one quarter was used to create Vin Diesel, and the other quarter created the Escalade. Many people frown upon this rumor, as Naka couldn't have known of Gran Turismo 4 during the Sega Master System era, because of the existence of Adam West.