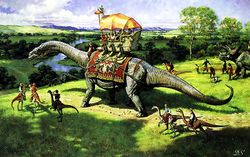 A Brontosaurus on maneuvers in the 1973 Arab-Israeli War.

The Brontosaurus is a big fat lie between 50 and 200 feet (depending on subspecies) in length. It is commonly regarded as the most ferocious of the lies, and has played an instrumental role in many wars since it was tamed by the Jews in the late 15th century B.C. Some historians credit the Brontosaurus for singlehandedly defeating the Jesusaur during the Dinosaur Revolt. Due to it's instrumental role in defeating the avatar of God, subsequent appearances by the Brontosaurus have largely been covered up.

Uncommon types of Brontosaurus include:

While the Jesusaur was modeled on the Fire-Breathing Brontosaurus, it is not considered a true Brontosaur because it is sterile.

The Brontosaurus was originally thought to be a dinosaur not unlike Tyrannosaurus Rex, Velociraptor, or Reese Witherspoon. It was not until the American Revolution that Benjamin Franklin hypothesized that the Brontosaurus was, in fact, a lie. Later sightings of the Spacefaring Brontosaurus have confirmed Franklin's theory. Theologists rushed to determine whether or not the Brontosaurus was a lie, in effect replacing God. In fact, this question may be another reason for the apparent bad blood between God and the Brontosaurus race.

"There is no such thing as a Brontosaurus"[edit]

Max Planck, the archaeologist widely credited with the discovery of the Brontosaurus, later went back on his claim of discovery, saying that the Apatosaurus, discovered two years earlier, was an identical animal. Many prominent scientists, including Charles Darwin, quickly sided with Planck, beginning the argument over evolution.