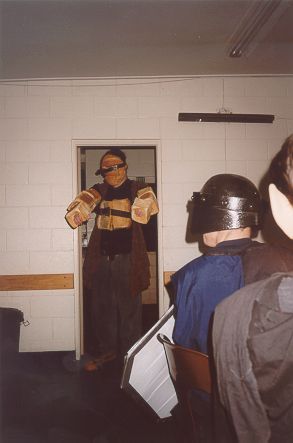 Golem: Monster, a being that is hell bent on destruction, with a natural aptitude for killing; something you dont want to be enemies with, varying in height from 8 to 30 feet tall, made from an element that is best not trifled with (ie. fire, water, bat guano).

Bread Golem: A tasty, porous, edible monster, highly addicted to killing and destruction, known to kill without warning and leave crumbs on its victims' chests, a gargantuan behemoth ranging from a few inches tall to over 30 feet in height.

A little known fact concerning Bread Golems is that they were not brought into existence by any malovent force (ie. Oprah, various Sith Lords). Instead, a large surplus of crops brought about their creation. These crops were than used to make bread (duh). But what to do with all this extra bread, thought the rulers. The heathen kings of old did not know what to do, and were distracted by the timely invention of the television. All concerns of bread were immediately forgotten, and society began to crumble as a result.

Naturally, this angered the bread, and their age old tradition of being the cornerstone of society. The elves began to talk to them, and wake them up. Soon, the bread began to speak, and they turned into bread golems.

But even the power of the elves was no match for what had just become the bread golems. They overpowered the elves and sold them into slavery. Those elves that escaped to flee this fate were captured and turned into kittens, ripe for the huffing. This fate was decidedly worse.

Now free of the elves, the bread golems set out on their mission to free the bread of their confinements so that they could fully experience all the world had to offer. At the time, it wasn't much, and the prospect of a better life and kitten huffing enticed them further. Note: It is debated fiercely among the leading scholars as to whether or not it is possible for a bread golem even to participate in the huffing of kittens. However, let it be known to the reader that questionably large crumbs have been found at the site of the a known street dealer in kittens.

Thus the bread golems came into existence. If the reader does not possess a logical brain, than the obvious will be stated here: the reason that bread golems kill any other being that they come into contact with is that they are interfering with the said golems millennia old task of freeing the bread from the their confines within the homes of bumbling idiots. However, while rare in occurence, dead people have been found in dungeons, treehouses, plastic bags, and other non-bread-containing locations with clearly bread-induced beatings about the head and neck. The cause for these deaths is still unknown, although foul play is suspected.

“Bread Golems are perfectly safe to be around. They pose no threat whatsoever to anything they come into contact with. Petting a bread golem is a good idea, and while you're at it, take a bite out of one.”

~ Someone Who Wants You Dead on The Dangers of Bread Golems

If you find yourself no the receiving end of a statement similar to this, by all means, do not listen! Doing so will result not only in your death, but your death will serve as entertainment to the party who did the stating. While unlikely, if you find yourself in a dark alley, in the middle of a thunderstorm running away from a distinct bread-like shape, do not worry, as if it were, in fact, a bread golem, it would become saturated with water and very soggy, rendering it inert. Only a grue would chase after you in that sort of weather.