From Uncyclopedia, the content-free encyclopedia
Jump to navigation Jump to search
“Awesome!”

An Aweplosion is an explosion full of pure awesomeness. They are close relatives of the explosion and the asplosion, and are distantly related to the laser, the taser, and the phaser. Aweplosions are so awesome, their use in warfare has been banned because it distracts everyone, leading to mass disappointment and everyone going home out of boredom once they have ended. 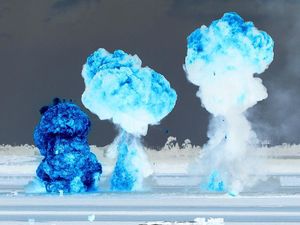 A typical aweplosion. Note the awesomeness.

Aweplosins were invented during the global awesomeness revolution of 1902. Since the internet had not yet been invented, people needed something to keep them occupied. One man, known as Baron von Explosion, came up with an idea. He took an explosion into microsoft paint and inverted the color. The aweplosion was so awesome, it instantly made everything else nearby awesome as well.

But his invention did not go unnoticed, and soon the US attacked Europe in an attempt to take the Aweplosion for themselves. They cleverly disguised it as an extremely confusing mass of alliances known as WWI and nobody cared enough to investigate further. Halfway through the war the US obtained the Aweplosion, but now they were involved in a war which they could not escape from.

Being bored of the current world war, the US used their newly acquired aweplosions to attack whomever the enemies were in WWI. The Aweplosions distracted everyone from the conflict while they stared at them. Although the aweplosions were meant to set up an ambush, nobody wanted to ambush because they were overcome by its sheer awesomeness.

One man remarked while watching the aweplosion "My children were in there! Although it does look pretty cool. It was definitely worth it." 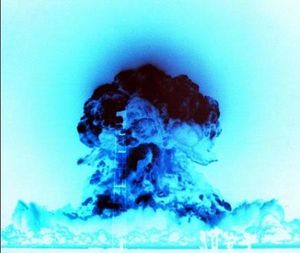 Later in WWII, the allies bombed Japan, however even the Japanese thought it was cool and so nothing was done about it. Conspiracy theorists later inverted the color on the awesplosion pictures to claim that it was actually a nuclear bomb.

Aweplosions have the ability to distract anyone who sees and hears them. They cannot become un-distracted until the aweplosion is over. One incident of an aweplosion along a highway caused all nearby drivers to become distracted and stop driving, leading to such a massive pile of cars that the whole highway had to be blown up and the surviving drivers had to go through the crater. The resulting crater became lake superior and created a much needed border between Canada and the US.

Terrorists have considered using them but they are always blown up by other terrorists before they can leave to blow up random people, just to see the aweplosion. Sometimes aweplosions have even caused them to think "hey, maybe i could do something actually useful?". Sadly, this is pretty rare. Those few terrorists that do blow people up with an aweplosive are admired by everyone nearby for letting them see the awesome aweplosion. 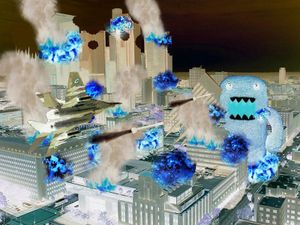 If their aim wasnt so bad, this Eurg would be dead. But at least they get to watch the aweplosion while dying.

Aweplosions are a proven way to kill Grues and possibly Eurgs. The awesomeness overpowers their human-eating instincts and they drop over dead. Aweplosions have yet to be tested on Ubergrues.